I didn't expect Karthik to hit the last-ball six: Kohli

I didn't expect Karthik to hit the last-ball six: Kohli

Royal Challengers Bangalore batsman Virat Kohli said he did not expect KB Arun Karthik to hit a six off the last ball in their thrilling win over the South Australia Redbacks in their crucial Champions League T20 match at Bengaluru. 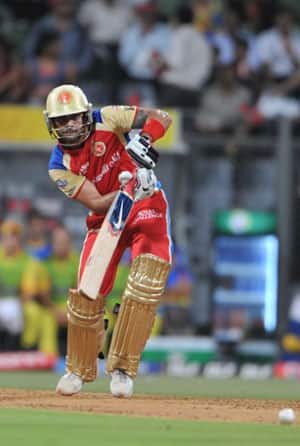 Royal Challengers Bangalore batsman Virat Kohli said he did not expect KB Arun Karthik to hit a six off the last ball in their thrilling win over the South Australia Redbacks in their crucial Champions League T20 match at Bengaluru.

“I didn’t (expect) honestly. I was sitting next to the coach and we needed seven off two. I told him if we get four off this ball and two off the next then we would make it. But when we got just a single, I closed my eyes and said, ‘Whatever happens, happens.’ In the end he hit a six. No one believed what had happened. We will have to watch this game all over again to believe what Karthik did,” Kohli said.

The middle-order batsman has acknowledged that the presence of former Indian cricketers Anil Kumble and Venkatesh Prasad helps a lot.

Kohli said, “It’s priceless. They have so much experience that they can keep talking to the bowlers and tell them where to ball. They can talk to the batsmen and tell them how to go about their game.”

Recalling their successful run chase against the Redbacks, Kohli said, “We knew that the wicket was good but you needed some partnerships to get there. In T20 cricket it’s all about smashing the ball from ball one.”

“We thought that if Chris (Gayle) and Tillakaratne Dilshan bat for 5-6 overs and get us off to a strong start, which they did, it would be easier for us to go at about 10 an over till the 13th over. That was our plan and we executed the plan properly. Getting that 100-run partnership with Dilly was crucial. We have never chased 200-plus score in T20… very excited right now,” he said.

Kohli once again said Chris Gayle is the key player in their side. “He is an impact batsman for us. I have always believed, in the IPL as well, that if he doesn’t end up getting big runs then probably Dilshan or I have to step up.”

“All of us have all the shots and it’s just about being confident and not putting too much pressure on Gayle. Him playing the way he is is a blessing, but we have been picked for a reason too,” he added.

Kohli played a quickfire innings of a 36-ball 70, and said he enjoyed batting with Sri Lanka captain Tillakaratne Dilshan. “Dilly and I got out at the wrong time. I was dropped before that and I got out in that same over. But at no point did I think we were going to lose. I asked Dilly to keep going as it would have been heartbreaking to lose it after coming so close. The two sixes that Saruabh Tiwary and Mayank Agarwal hit were really important shots at that point in time. We were pretty confident of winning except in the last three balls.”

Royal Challangers Bangalore will now take on Simon Katich-led New South Wales Blues in the first semi-final of the tournament on Friday.

Assessing conditions and playing accordingly will be the key: Bairstow