Former New Zealand international Ian Smith has opened up on his experience of commentating during the final moments of the ICC Cricket World Cup 2019.

Former New Zealand international Ian Smith has opened up on his experience of commentating during the final moments of the ICC Cricket World Cup 2019 that saw England emerge winner under unreal circumstances.

England and New Zealand played out a tie before a Super Over to break the deadlock also ended on level terms. However, England were declared winners on boundary counts and thus lifting their maiden ODI world cup trophy in front of a packed Lord’s cricket ground.

Smith, who played 63 Tests and 98 ODIs between 1980 and 1992, was on air witnessing the surreal turn of events and trying hard to keep a lid on his emotions during a stint that stretched almost an hour.

“My last commentary stint lasted an hour it’s normally half that but it flew by,” Smith told Wisden. “I could never have envisaged calling drama like that Boult standing on the boundary line the overthrows off Stokes’ bat. I’ve seen deflections off the stumps go for four and deflections off the body go for four but I’ve never seen a batsman diving and the ball deflect off his bat for four and up the hill at Lord’s!”

He continued, “I was trying to keep a lid on it because I wanted to get my head around all the scenarios. But I was caught up in the euphoria of it I didn’t sit down for the last 15 minutes and nor did Nasser.”

Smith also predicted the highly entertaining contest will inspire and generate interest among the upcoming generation in both New Zealand and England. “It has to be good for the game. If kids don’t want to pick up a cricket bat in New Zealand or England now, I’d be surprised and disappointed. If this doesn’t give the game in England a shot in the arm or a kick in the jacksie then I don’t quite know what will,” he said. 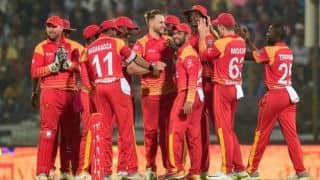