I don't think I'm only a Test bowler: Amit Mishra

I don't think I'm only a Test bowler: Amit Mishra

Leg spinner Amit Mishra, who has been selected in the Indian ODI and T20 team for the upcoming tour of West Indies on Saturday said that he considers himself to be good enough for all the formats. 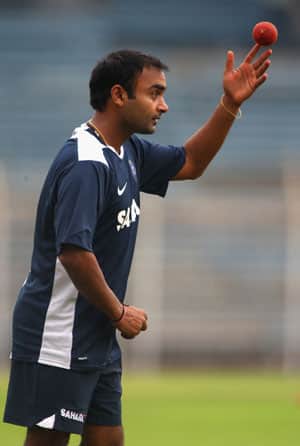 Leg spinner Amit Mishra, who has been selected in the Indian ODI and T20 team for the upcoming tour of West Indies on Saturday said that he considers himself to be good enough for all the formats.

“I don’t know who has said that I’m a Test bowler. I have been bowling in the IPL for the past four years and have been among the leading wicket-takers. I have been performing at all levels. I don’t think I’m only a Test bowler,” Mishra told reporters here after winning the man of the match award.

Mishra till date has played 10 ODIs taking only 8 wickets.

The Haryana captain is certainly happy to have made a comeback in the national squad for the tour of West Indies after being ignored in the World Cup.

“I always try to give my best at whatever I do. I’m happy that my name is in the team,” he said.

Mishra, who scored a quickfire 18 of just six balls and conceded just 18 runs in his four overs, felt that the last over of the Deccan Chargers’ innings bowled by Munaf Patel in which the visitors smacked 23 runs was the turning point of the match.

“Yes I felt that (Munaf’s over) was the main point of the match. About 23 runs came of that over. We also bowled and fielded well,” he added.

On his altercation with Munaf, he said, “It happens. It’s not that it has never happened with me before. Its just that I have never shown my anger on the field but today it got reflected.”

Mishra said Australian Cameron White, who is the vice-captain of the squad, was likely to take over once Kumar Sangakkara left for national duty.

“Cameron White is the vice-captain maybe he’ll take over once Sangakkara is gone,” he added.

Mishra feels that the four boundaries he hit today was a result of the effort he put on his batting.

“For the last 6-7 months, I am concentrating on my batting and fitness. I feel there are many occasions when some crucial 15-20 runs are needed from you. I want to contribute in all ways,” he added.

The leg-spinner said there was a healthy competition between him and left-arm spinner Pragyan Ojha and this was helping him improve his bowling.

“There is healthy competition between me and Pragyan. We always talk to each other about how to improve ourselves. I feel my bowling has improved because of such competition,” he said.