After a strong start, Mumbai found themselves in a spot of bother at 98/3. But Suryakumar and Lad took Mumbai out of trouble

The last time Mumbai played Railways this domestic season was in the Vijay Hazare Trophy, and Mumbai amassed 400 runs in 50 overs with the help of centuries from Prithvi Shaw (129) and Shreyas Iyer (144), beating Railways by a massive 173-run margin.

However, in the Ranji Trophy season opener, Mumbai, playing against Railways, did not have the luxury of their big stars with Shaw, Iyer and Ajinkya Rahane opting not to be travel to Delhi for the opening fixture.

And after a strong start, Mumbai found themselves in a spot of bother at 98/3. But experienced campaigners Suryakumar Yadav and Siddhesh Lad took Mumbai out of trouble and put the team on course for a strong total on day one of the Elite Group A match at Delhi s Karnail Singh Stadium.

Suryakumar, an attacking batsman, curbed his natural instincts negotiating the pace and swing of Railways stand-out bowler of day day, Anureet Singh, before opening up. He scored 83 and combined with Lad for a stand of 129 runs for the fourth wicket.

I acted according to the situation. We had lost three wickets and at that time building a partnership was very important and I tried to do that with Lad, Suryakumar told reporters at the end of day s play.

Bad light forced early close of play with Mumbai reaching 278/5 in 80 overs. Suryakumar, praised Lad, who has earned the moniker of Mumbai’s crisis-man for his brilliant batting under pressure in the past.

I always enjoyed batting with him. whenever he comes out to bat he brings in a lot of confidence, because he has done it [bat under pressure situations] in the past. We have a good understanding between the wickets and we set small goals and we try to achieve it, said Suryakumar about Lad, who remained unbeaten on 80 on day one.

On being asked whether the absence of big stars will affect Mumbai s campaign, he said all the 11 players playing and the ones on the bench are stars in their own right and is confident that the young players will step up as in when required.

During the day, Lad played with anti-pollution mask on to counter the air pollution in Delhi and it raised quite a few eyebrows among the reporters and the spectators, but Suryakumar, who was batting at the other end, when Lad asked for the mask, said he did not feel the need to wear the mask. 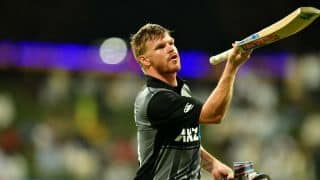 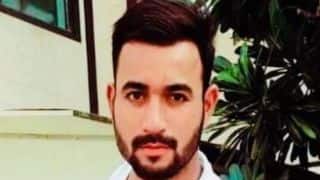