Ashley Nurse put up an all-round show in Pune to guide West Indies to their first win on their current tour of India.

Ashley Nurse put up an all-round show in Pune to guide West Indies to their first win of the current tour of India. After being put in to bat, Nurse belted 40 off 22 late in the innings to push his team to a competitive 283/9 in the third ODI. Then he picked up two important wickets including that of Shikhar Dhawan and Rishabh Pant to derail India’s chase.

India were eventually bowled out for 240 as the tourists drew level at 1-1.

Nurse, chosen as the man-of-the-match, says he’s focused on his job for the team and he’s bound to have off-days and that he doesn’t pay any heed to his critics.

“Every day is fishing day but every day is not catching day,” Nurse said at the post-match press conference. “So I just go and put the ball in the right areas, try to create as much chances as possible. And just try do my job, not really care about the critics, just go and do my job for the team each and every day.”

West Indies were outplayed in the two-Tests that preceded the ODI series. After losing the opening game in Guwahati, it seemed the story will be repeated in the limited overs as well but a thrilling tie in Vizag was followed by a confidence-boosting win in Pune on Saturday. Nurse said with this performance, Windies have proved their critics.

“It was a very good performance by the boys. No one gave us a chance when we came but I think we’re showing the public out here that we are here to play. It’s just good to see the boys play consistent cricket and giving India a run for their money,” the 29-year-old said. 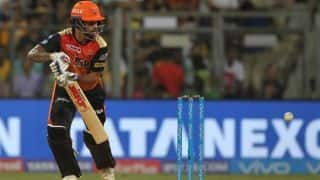