His good form in the ongoing Indian Premier League notwithstanding, Mumbai Indians batsman Rohit Sharma said that presently he was not thinking about a comeback into the Indian team. 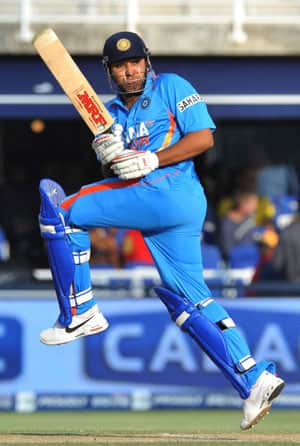 His good form in the ongoing Indian Premier League notwithstanding, Mumbai Indians batsman Rohit Sharma said that presently he was not thinking about a comeback into the Indian team.

“I don’t want to think too much about that. I am taking one thing at a time. I just want to concentrate on the IPL. I want to win the trophy for Mumbai. By thinking too much you just confuse yourself,” Sharma told reporters after his side’s 32-run win over Delhi Daredevils at the Wankhede stadium on Saturday.

He was responding to a query on whether he was eyeing a comeback in the national squad for the upcoming tour of West Indies.

Asked whether he was disappointed of not being able to cement his place in the ODI squad, he said, “That is gone. I don’t want to think about the past now. I am doing well now and want to concentrate on it.”

Sharma, who made a 32-ball 49 today to set up the foundation for his side’s huge 178 for four, said he was happy with his performances in the Twenty20 tournament so far.

“It has been up and down so far. Whatever limited opportunities I have got I think I have done well. I am hitting the ball well. I want to continue doing that till the end,” he added.

Sharma said given the format of the tournament it was important for Mumbai Indians, who won their eighth match and have virtually qualified for the play-offs with 16 points, to maintain its consistency.

“As of now we cannot take it easy. We want to be right at the top till we go into the semis (playoffs). We have four more games to go and other teams are also doing well. So we don’t want to relax. We have to go and play our best cricket in the remaining games,” he said.

On his own innings, he said though he was struggling initially, he was confident of doing well once he stayed on the crease for a long time.

“I struggled initially but was confident that if I play for a longer period I will do well. I had to play according to the situation and that is what I did,” he added.

“He is obviously a very dangerous player. He had played a very good knock in his last game (119 in 56 balls against Deccan Chargers). It was important to take his wicket. We had made plans for him and that worked for us.”

Asked about Harbhajan Singh, who was seen limping in the ground, he said, “He (Harbhajan) twisted his ankle while coming down (from the pavilion) during the Delhi innings. He bowled his four overs. I think he is fine.”