“I won't be surprised if he opens innings for India in Tests”, says Ravichandran Ashwin’s childhood coach

“I won't be surprised if he opens innings for India in Tests”, says Ravichandran Ashwin’s childhood coach

It was Ravi Shastri who had told former BCCI chief N Srinivasan that the off-spinner could be slotted in the team as an all-rounder after he scored 91 against England at the Eden Gardens in 2012.

India s Test captain Virat Kohli never misses a chance to surprise the opposition. Besides not fielding the same side in any of his Test, he has more such tactical manoeuvres up his sleeves to outfox his opponents. One such decision which he took was to adopt the five-bowler strategy. It did wonders for him, as Team India started winning consistently in Tests. But what it also did was to bring the all-important No.6 spot under the spotlight. Who would get to play on the coveted spot was the question, and the possible answers were Rohit Sharma, Wriddhiman Saha and Ravindra Jadeja.

However, a dark-horse emerged, who sealed the spot by beating his competitors. It was none other than the off-spinning all-rounder Ravichandran Ashwin, who is also currently the best Test all-rounder in the world. Starting India s campaign in Tests this year with two centuries in the Caribbean, Ashwin s recent scores read 32, 70, 7, 58 and 72 in the ongoing Test series against England. Without any doubt, he has made the position his own. And though his heroics with the bat may have surprised all and sundry; his teammates, his opponents, his fans and the experts, one man always had the belief on his ability. He now finds himself at the peak of Test all-rounder’s ranking.

Meet Ashwin’s childhood coach Sunil Subramaniam the man who had famously prophesised almost three years ago, that Ashwin could be opening the innings for India in Tests one day. Ashwin, who might have found it a bit bemusing, did not laugh it off, but instead worked harder in the nets. Today, Subramaniam is a happy and content man, as his famous pupil has proved him right. I was the first one to tell him that his batting style has certain similarities with VVS Laxman with whom I have played at the domestic level. I see him doing this for India on a regular basis, Subramaniam told Times of India.

He further added that, It’s true Ashwin spends a lot of time these days batting in the nets. He is mentally strong and a good batting spell does not affect his bowling. He knows his areas of strength and also knows how to manage failures. I won’t be surprised if he continues to bat like this and even opens the innings for India. He is quite capable of doing it, Subramaniam added.

Many former Indian players are also of the same opinion. It was Ravi Shastri who had told former BCCI chief N Srinivasan that the off-spinner could be slotted in the team as an all-rounder after he scored 91 against England at the Eden Gardens in 2012. Former captain Dilip Vengsarkar also agreed that the No. 6 slot belongs to Ashwin, at least at home. I don’t have any doubt that Ashwin’s batting slot is No. 6 at home. The team would certainly continue with him if he is able to show the same kind of form outside India, the report quoted Vengsarkar as saying.

Former Indian player-turned-coach Pravin Amre too agrees with the same, saying, He [Ashwin] has been scoring runs when it matters the most. I am sure with runs behind him, he is only going to get better. I would be happy to see Ashwin become India’s mainstay at No. 6, home and away. 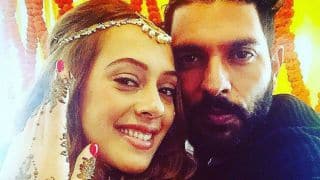