Pakistan head coach Misbah-ul-Haq has asked critics to be patient on his players making a comeback to international cricket.

Pakistan head coach Misbah-ul-Haq has asked critics to be patient on his players making a comeback to international cricket saying they will need time before getting into the groove. His comments have come after Pakistan succumbed to a 64-run defeat at the hands of a second-string Sri Lanka in the series opening T20I on Saturday.

Pakistan had recalled out-of-favour pair of Ahmed Shehzad and Umar Akmal into their T20I squad for the three-match series but they failed to make any significant contribution. Shehzad struck four off nine deliveries while Akmal was out for a duck drawing harsh criticism for their failures.

“There is no need to press the panic button,” Misbah told reporters ahead of the second T20I on Sri Lanka. “I would ask the critics to go easy on the players who fail. When a player makes comeback, he needs time to settle down again and perform.”

Misbah said players being recalled keeping in mind the next year’s T20 World Cup in Australia and positive results will take some time. “I think when you experiment keeping in mind next year’s World T20 in Australia, one has to be patient with the recalled players and allow them to perform in order to get positive results. Results will not always go your way but we have to be patient. I am confident that we can comeback in the series strongly,” he said.

Pakistan rung in several changes to their T20I team owing to a combination of illness, injuries and experimentation. Shaheen Shah Afridi, Hasan Ali and Imam-ul-Haq are recovering from illness and injuries while Fakhar Zaman and Haris Sohail have been rested. 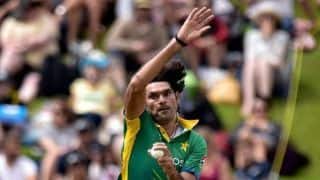 Gautam Gambhir didn’t like to face me in match or nets: Mohammad Irfan CoA yet to send notices to office bearers for the election: BCCI functionary