While the cricketing world continues to grapple with issue of safer helmets to prevent potentially fatal injuries to batsmen, former Australia captain Kim Hughes has created controversy, calling for helmets to be banned from junior cricket.

During a commentary stint for Fox Sports at the ongoing JLT One Day Cup in Australia, Hughes backed his argument saying helmets inculcate a false sense of safety and prevent youngsters from learning appropriate footwork.

“If I was coaching youngsters today I d coach them without helmets because it teaches you the correct footwork,” Hughes was quoted as saying by 9news.com.au on Thursday. “It gives them a false sense of security, they just lunge forward. And I know you can t but … they think they re safe but they re not. There s more blokes hit now with helmets than there ever used to be.”

The comments will raise eyebrows as they come days after Cameron White was hit by a ball on the shoulder while playing in the JLT Cup.

Four years ago, Australia batsman Phil Hughes tragically died after being struck on the head while playing in a domestic match. He was hit on the back of his head by a Sean Abbott bounces in 2014 and succumbed to the injury just three days short of what would have been his 26th birthday.

The incident led to a down-pouring of grief from the cricketing world and led to calls for improving batting helmets. 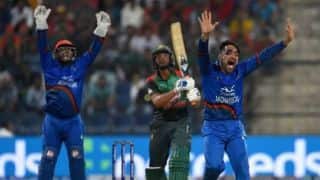