Dale Steyn knows the competition is tough but he's eager to book a spot in South Africa's squad for the ICC World Cup 2019 in England.

Dale Steyn knows the competition is tough but he’s eager to book a spot in South Africa‘s squad for the ICC World Cup 2019 in England. It’s been two years since he has played in an ODI and the emergence of young crop of fast bowlers has only made the task that much harder to break into the playing XI for Steyn.

But Steyn is loving the challenge. “It’s good to have challenges,” Steyn was quoted as saying by ESPNcricinfo. “I think Lungi [Ngidi] and KG [Kagiso Rabada] would also appreciate the fact that I’m coming back into the side because they would also know that their positions are under threat. We all are. You can only take a handful of these fast bowlers to the World Cup and we’re all fighting for a spot.”

Steyn harbours hopes of another world cup appearance but more than playing for Soith Africa again at the marquee tournament, he would be happier should they win it even if he’s not a part of the winning squad. “Everyone wants to go to the World Cup and I would love to go to the World Cup, but individually I would love nothing more than to see the Proteas win a World Cup. And if that means that I don’t go, then so be it.

“I did my job coming in here, pushing guys to perform at their best. Pushing KG, pushing Lungi, pushing Andile, all these guys. I’m just happy to be here, playing cricket, and challenging them,” the 35-year-old said.

Steyn is part of South Africa’s 14-man squad that will face Zimbabwe in a three-ODI series starting from Sunday. He last played an ODI in October 2016 in a five 5-0 series win against Australia. He went wicketless in that game and gave 56 runs in 9.2 overs.

“It’s so bloody long ago I can’t even remember it. What I do remember is that we won five-nil. And it’s a team game. And that’s all that matters,” he said. 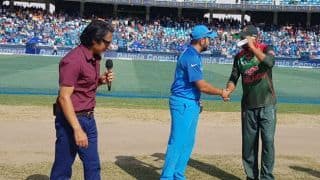