New Zealand claimed the vital wicket of Ian Bell in the last over before tea to move to the brink of an historic series win over England with one session remaining in the deciding Test. New Zealand claimed the vital wicket of Ian Bell in the last over before tea to move to the brink of an historic series win over England with one session remaining in the deciding Test.

It was the second wicket England lost in the session as they were reduced to 237 for seven with Matt Prior unbeaten on 45, the only recognised batsman left.

The target of 481 they were set to win was an impossibly distant prospect as the focus turned to the grim fight for survival through to stumps to avoid a rare series defeat to the Black Caps.

Bell stood defiant for nearly five hours, but on 75 and four balls from the break, he edged a full delivery from Neil Wagner for Tim Southee to claim the catch at third slip.

Bell and Prior, who flirted with danger several times, shared England’s best partnership of 78 and the longer they were together the more New Zealand regretted two dropped catches in the last over before lunch.

Bell and Jonny Bairstow were both put down in the slips as Trent Boult found prodigious swing with the new ball.

Unlike Bell, Bairstow was unable to cash in on his early luck and he departed in the third over after lunch for six, caught by Ross Taylor at first slip off Southee.

Prior refused to bow to the intense pressure England were under in their fight for survival and was prepared to chance his arm regardless of the risk.

On 18 he survived two appeals for caught behind that went to review, on 20 he was dropped by Wagner running backwards at midwicket, and on 28 the ball deflected off his helmet and on to the stumps but the bails did not come off.

For New Zealand, left-arm quick Wagner has two for 37 and part-time spinner Kane Williamson two for 36.
The series is locked nil-all after the first two Tests were drawn.

New Zealand have only won three of 32 series against England. The last time was in England in 1999. 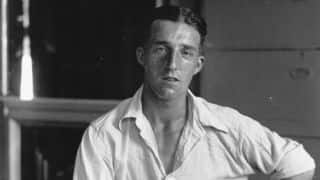