Jos Buttler made an unbeaten 47 off just 16 balls to set-up England's 34-run win over New Zealand in the third and final one-day international at Trent Bridge on Wednesday. 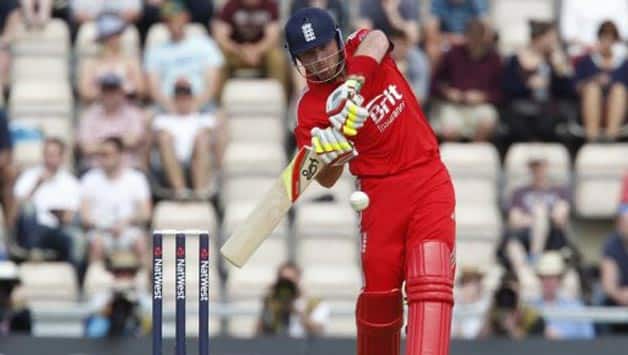 Jos Buttler made an unbeaten 47 off just 16 balls to set-up England‘s 34-run win over New Zealand in the third and final one-day international at Trent Bridge on Wednesday.

Man-of-the-match Buttler needed a six off the last ball of England’s innings to surpass Sri Lanka great Sanath Jayasuriya’s 17-ball record for the fastest ODI fifty, set against Pakistan in Singapore in 1996.

But instead he could only manage two off Tim Southee. Nevertheless the 22-year-old wicketkeeper’s innings featured six fours and three sixes.

The Black Caps still took the three-match series 2-1 after wins by five wickets and 86 runs at Lord’s and Southampton respectively last week as England suffered their first home ODI series loss in four years.
For England, victory stopped the rot ahead of their Champions Trophy opener against arch-rivals Australia at Edgbaston on Saturday.

“Getting a win was very important and I thought we played pretty well,” said England captain Alastair Cook at the presentation ceremony. Jos’s knock was the difference between the sides.”

Meanwhile, Buttler added:”I got a good opportunity with a license at the end of the innings to go out and express myself.

“It’s nice to contribute to a winning performance and hopefully there are many more to come.”
New Zealand captain Brendon McCullum was disappointed with Wednesday’s result but remained upbeat ahead of the Black Caps’ Champions Trophy opener against Sri Lanka in Cardiff on Sunday.
“We were good for the majority of the game but Buttler’s innings was world-class,” McCullum said.

“We possess some destructive players and England do as well, but overall we take a lot of confidence and look forward to the Champions Trophy.”

New Zealand, chasing 288 for victory in this day/night fixture, finished on 253 all-out after England finally saw the back of man-of-the-series Martin Guptill.

The Kiwi opener had twice made them pay for dropping him on 13 in succesive matches with 103 not out at Lord’s and a New Zealand record 189 not out at Southampton.

But on Wednesday he made just 38 before he was bowled by an off-break from James Tredwell, in for fellow spinner Graeme Swann in one of four changes to the England team.

That still left Guptill with a series average of 330.

“Today [Wednesday] didn’t go quite as we planned but we’re still happy to win the series,” said Guptill.

Encouragingly for England, pacemen Stuart Broad (knee) and Steven Finn (shin) returned after missing the first two matches of this series through injury. And when Broad, on his Nottinghamshire home ground, had James Franklin caught in the gully by England captain Alastair Cook, New Zealand were 122 for six.

Ross Taylor kept New Zealand in the hunt with 71 off 84 balls including three sixes and two fours — his third fifty of the series. His last two sixes came off successive Tredwell deliveries. But, going for three in a row, Taylor was out when Finn threw the ball to Tim Bresnan, who completed the catch.

That left the tourists needing 53 from their last-wicket pair of Kyle Mills and Mitchell McClenaghan to complete an improbable victory. But when McClenaghan holed out, England had won with 21 balls to spare.

Earlier, England saw Ian Bell top score with 82 but, at 210 for five in the 46th over, it seemed they’d fall short of a competitive score.

However, a stand of 62 between Eoin Morgan, who made 49 at better than a run-a-ball, and Buttler boosted the total to 287 for six.

Buttler, off only his third ball, struck seamer Mills over long-on for six. Next ball he produced a trademark scoop shot for four over short fine leg and the ball afterwards hit another legside boundary. There was more to come, with the fourth ball of the over reverse-scooped over short third man by Buttler for yet another boundary.

Buttler missed the fifth ball but the sixth was smashed back over Mills’s head for four more as 22 runs came off the 48th over, the most expensive of the innings.