Yet another Ian Bell century, and yet another Shane Watson injury, have soured Australia's drive towards victory in the fourth Ashes Test, Australia's newspapers said on Monday. 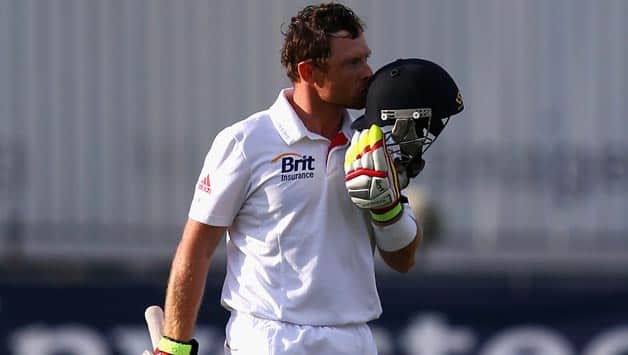 Yet another Ian Bell century, and yet another Shane Watson injury, have soured Australia‘s drive towards victory in the fourth Ashes Test, Australia’s newspapers said on Monday.

Bell’s third hundred of the series rescued England from another top-order collapse and left them well-placed at stumps on Sunday’s third day at 234 for five in their second innings, a lead of 202 runs, with Bell 105 not out.

While Australia’s cricket writers praised Bell’s batsmanship, they bemoaned yet another injury to allrounder Watson, who left the field midway through an over with hip and groin pain.

“It took him 31 Test innings against Australia before he finally landed a Test century and now with a trio of tons over the past month, he has notched up four hundreds in his past five Ashes contests.”

The Daily Telegraph‘s Malcolm Conn said Australia will have to create history if they are to win the fourth Test and may be forced to do it without Watson.

“Only twice in 133 years of Australia touring England has it managed to chase down more than 158 for victory,” Conn wrote. “How much Shane Watson can contribute remains in doubt given his extensive injury history and that he does not usually heal quickly or easily.”

The Australian‘s Wayne Smith said the injury-plagued Watson now presents Australia with serious issues, both for the remainder of the fourth Test and going into the final Test starting at The Oval on August 21.

“Not only does his injury leave Australia a bowler short for the rest of the England innings but it casts a cloud over his ability to bat as well – at a time when Australia will need every man standing if it is to chase down what is already an intimidating fourth innings target,” Smith said.

The Daily Telegraph‘s Richard Hinds said England have left Australia struggling to ensure their fragile batting line-up is not forced to face a significantly larger total against the spin of Graeme Swann, and England’s talented seam attack, on a fourth and fifth day wicket.