England captain Alastair Cook said Ian Bell's dismissal in the ninth over was a poor umpiring decision which finally proved to be the turning point of the match for the hosts. 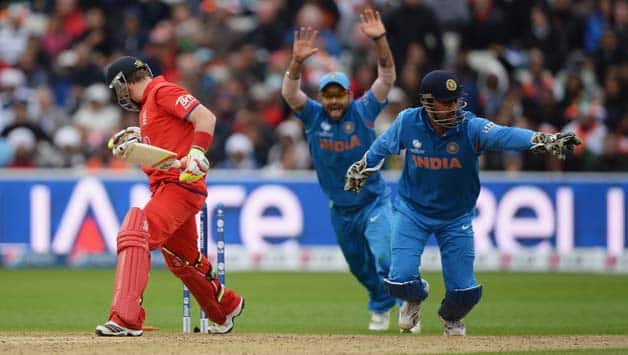 England captain Alastair Cook said Ian Bell‘s dismissal in the ninth over was a poor umpiring decision which finally proved to be the turning point of the match for the hosts.

Bell (13) could consider himself unlucky as he got a raw deal from third umpire Bruce Oxenford. He was adjudged stumped off Ravindra Jadeja‘s bowling when TV replays showed that Bell had got his foot back before MS Dhoni was able to whip off the bails.

“I thought it was a poor decision,” Cook said at the post-match press conference after India defeated England by five runs in the rain-hit final to lift the ICC Champions Trophy 2013 on Sunday night.


“I only saw the replay a couple of times on the Belly one. Maybe he (TV umpire) saw a different angle than we saw. It looked pretty clear that it was in, but he’s paid to make the decisions. If he had made the decision, it’s the umpire’s game, so that’s said.”

“Look, towards the end, you’re always going to be spinning as much as that is, it’s very hard for the new guys coming in. So we needed a batter in at the end if we wanted to win that game.”

Cook, however, didn’t say whether his report to the ICC will mention the umpiring howler.

“It’s all confidential,” he said tongue-in-cheek.

Cook also said that England lost a great opportunity to do something special in the final of an ICC tournament.

By losing Sunday night’s Champions Trophy final against India, England’s heartbreak of not winning a major 50-over tournament for four decades continued and Cook said he was devastated.