Bell remained unbeaten on 108 at stumps, Day One, as Warwickshire scored 308/2 vs Sussex.

England‘s top order has failed them in recent times. Even in the India series, the top four Alastair Cook and Joe Root included had failed to come off till The Oval Test, leaving the job to their excellent set of all-rounders. While Cook’s vacancy is likely to be filled by Surrey captain Rory Burns, there are evident holes in the middle-order that need to be plugged. Despite not having played a Test in three years, Ian Bell has emerged as one of the forerunners for a slot.

Playing for Warwickshire against Sussex at Hove, Bell remained unbeaten on a solid 108 not out at stumps on Tuesday, batting with complete authority. The Sussex attack, consisting of Jofra Archer, Chris Jordan, and David Wiese, was far from ordinary.

To be fair, Bell was never really under pressure after Will Rhodes (50) and Dominic Sibley (44) added 96 for the opening stand. Bell and Jonathan Trott (86*) have added an unbeaten 206 till the end. Placed comfortably at 308 for 2, table toppers Warwickshire will look to secure their promotion.

Bell also became the first player in Division Two of the ongoing County Championship. Even in Division One, Burns (1,319 at 69.42, four hundreds) is the only other batsman to reach the landmark. Bell’s 1,002 runs have come at 58.94 (he is unbeaten, so he may improve on that), and he had a hundred more than Burns.

Bell also became the first Warwickshire batsman since 2004 to score five hundreds in a season: he had himself scored six that season. 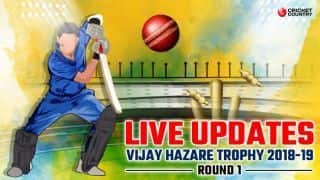