Babar Azam is catching up with Virat Kohli with pace but can he continue with same consistency for the next few years?

New Delhi: Pakistan skipper Babar Azam is going through a purple patch in ODI cricket. The classy batter has forced his way into the list of modern-day greats after staggering performances. Babar, who has an average of 59.22, including 17 hundreds in 89 games, recently scored a magnificent century against West Indies in the first ODI of the three-match series and created a unique record of scoring three consecutive hundreds twice, having scored hundreds against Australia in the previous two games. Babar Azam’s consistent run has drawn his comparison with former India skipper, Virat Kohli, who is arguably the greatest white-ball batter of the modern era. Kohli, however, is in the middle of a lean patch and has been struggling for runs. The Indian stalwart has not scored a century since 2019.

“Babar Azam is on the road to greatness. I want to be clear when I say ‘on the road to…’, in the white-ball cricket at least, and certainly in fifty overs. I don’t use the term ‘great’ loosely. It has to be a bigger sample size to bestow greatness on a player, but his average, as we speak now, (is) on the cusp on 60 with 17 ODI hundreds. He has almost overtaken his next door neighbour, the great Virat Kohli, in terms of the ultimate uber fifty-over batsman,” said Bishop during a conversation with cricwick.com.

“His Test cricket is a work in progress. I’m surprised he hasn’t taken to Test cricket numbers a lot earlier. He’s starting to get better at it. Technically, he’s superb. In future, I’m hoping he will be mentioned in the same breath in Test cricket as the top 3-4 players,” said Bishop 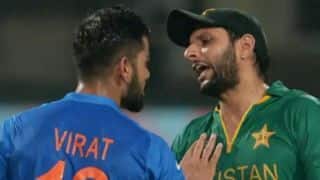