Cricketers from Argentina, Brazil, Peru, Canada, USA and Bermuda were present in the combine.

Cricketers from South and North America gathered in Indianapolis yesterday i.e. September 19, 2015 for the phase one of ICC Americas Cricket Combine. In this combine around 80 top cricketers from Latin America and North America participated in the wish to get selected for phase two of the combine. In phase two the players will have to compete against each other for a place in ICC Americas team which shall play in West Indies Cricket Board’s (WICB) Nagico Super 50 tournament scheduled for January 2016. Cricketers from Argentina, Brazil, Peru, Canada, USA and Bermuda were present in the combine. READ: ICC invites players from USA, Canada, other countries for first-ever ICC Americas Cricket Combine

Indianapolis (capital of US state Indiana) Mayor Greg Ballard was quoted by icc-cricket.com saying, “In Indianapolis, sports is more than just a pastime, it is an economic driver and part of our global identity.” Executive Director of St Vincent Sports Performance Ralph Reiff said at the end of the session, “The cricket athlete is someone we’re getting very accustomed to seeing and we’re gaining a quick affinity to the sport. Cricket belongs in Indianapolis. This is a sports city. You have a city of Indianapolis that embraces sport at every level. We’re thrilled that cricket is here in Indianapolis. This is an ideal location because this city speaks the common of language of sport. This inaugural Combine has been a great experience so far with the level of enthusiasm and talent.” Widely popular across the globe American fielding coach Mike Young said, “I’ve been all over the world in international cricket and am incredibly impressed by the facilities here in Indianapolis.” READ: MS Dhoni felicitated in New Jersey 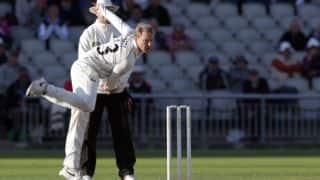