A T20I innings will be scheduled to span 85 minutes, instead of 80 minutes.

The International Cricket Council (ICC) under the chairmanship of their new chief N Srinivasan, met on June 27 and 28 during the annual conference week at Melbourne. Among the various topics discussed, the board showed concern for many current bowlers with suspected illegal actions.

The board noted the recommendations made by the ICC Cricket Committee and the ICC Chief Executives Committee, which encourage umpires and referees to identify bowlers with suspected actions and also suggested use of bio-mechanics during the assessment process and to allow ongoing scrutiny of bowlers.

Further update will be made in the next meeting.

The ICC further noted that international venues need to be set up with maximum possible boundary dimensions, as per the playing conditions, so that an appropriate balance is maintained between bat and ball.

The annual conference also noted many changes which were approved by CEC. The changes to the playing conditions for international cricket will come into effect from October 1, 2014.

Some of the changes are as follows:

1) A bowler who has spent time off the field in a Test will be allowed to resume bowling after he has either spent the same period of time on the field as he spent off the field, or he has been back on the field for 30 overs, whichever occurs first.

3) The trial regulation allowing an 80-over top-up of unsuccessful DRS player reviews will be extended for another 12 months. 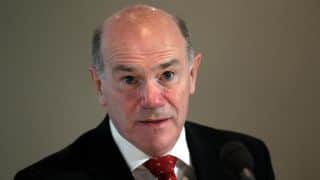