Pakistan s sensation Hasan Ali has been named ICC s Emerging Player of the Year at the ICC Award 2017. He has been picked ahead of the likes of Shadab Khan, Kuldeep Yadav, Alzarri Joseph, Peter Handscomb and Matt Renshaw. Ali made his ODI and T20I debut for Pakistan in 2016. He grabbed headlines with an impressive show in the ICC Champions Trophy 2017 in England, claiming a total of 13 wickets at 14.69.

In 2017, Hasan has played 18 ODIs for Pakistan taking 45 wickets that include three five-wicket hauls. He was also the quickest to reach 50 wickets for Pakistan (24 ODIs). His is also the first player from Pakistan to win this honour. Hasan finishes 2017 as the highest wicket-taker in ODIs with 759 ranking points, ahead of nearest Jasprit Bumrah by 16 points.

Other fast bowlers to win this prestigious awards in the past are Josh Hazlewood, Mustafizur Rahman, Steven Finn and Peter Siddle. 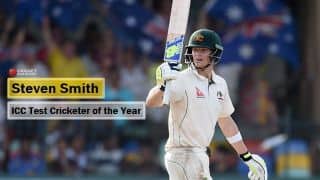