The tournament being held in Dubai has come under the scanner for the bizarre way of dismissals during one of its matches, leading ICC to conduct investigations against it.

The ICC today confirmed that there is “strong evidence” to indicate that the Ajman All Stars tournament is a “corrupt event” but at the same time clarified that the parent body cannot take action as it is not under their sanctioning purview.

The tournament being held in Dubai has come under the scanner for the bizarre way of dismissals during one of its matches, leading ICC to conduct investigations against it.

ICC’s GM (Anti-Corruption Unit) Alex Marshall on his part stated: “The event was not approved or in any way sanctioned by the Emirates Cricket Board (ECB) and therefore neither the ECB nor the ICC has authority to take action under cricket’s anti-corruption rules against anybody who may have engaged in any corrupt practice.

“However, after speaking to a number of those involved we consider there to be strong evidence to indicate this was a corrupt event and damaging to the wider reputation of cricket and as such will continue the investigation,” he added.

Marshall said ICC is now trying to track down the organisers of the tournament.

“Our ongoing enquiries will now focus on identifying the organisers of the tournament to prevent similar incidents occurring elsewhere and to disrupt corrupt practices wherever we can,” he said.

The ICC will also urge member boards to keep a tab on its registered players.

“In addition, all Member Boards whose players have participated in this event will be asked to consider whether by doing so, those players are in breach of any other applicable rules, including those that prohibit participation in unsanctioned cricket, and if so for disciplinary action to be taken against them.” 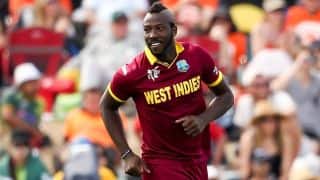 Andre Russell set to return after a year-long ban