ICC Champions Trophy 2013: England through to semi-finals with 10-run win over New Zealand

ICC Champions Trophy 2013: England through to semi-finals with 10-run win over New Zealand

Hosts England became the first team from Group A to enter the semi-finals of the ICC Champions Trophy 2013 with a 10-run victory over New Zealand. 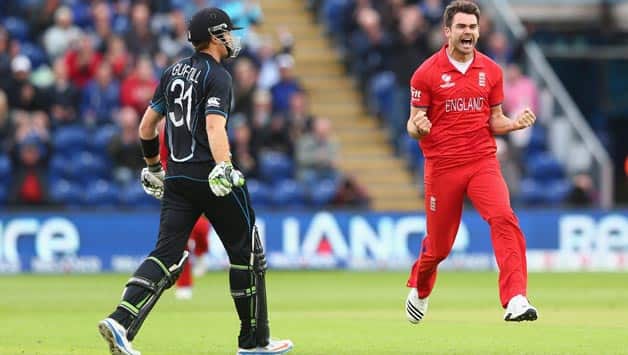 Hosts England became the first team from Group A to enter the semi-finals of the ICC Champions Trophy 2013 with a 10-run victory over New Zealand. The Black Caps still have a chance to qualify, if Australia beat Sri Lanka on Monday with a margin less enough so as to not take their net run-rate higher than that of their trans-Tasman rivals. However, if the Lankans win, they will join England in the semi-finals and knock New Zealand out.

England skipper Alastair Cook‘s timely half-century ensured the hosts reached a competitive 169 all-out in 23.3 overs in yet another rain-curtailed encounter, which was reduced to 24-overs-a-side, before James Anderson (three for 32) and Co ensured that England got home comfortably.

New Zealand were off to a disastrous start in their chase, with Anderson dismissing the two openers, Martin Guptill (9) and Luke Ronchi (2), within the first four overs. Guptill had recorded 103 not out and 189 not out against the Englishmen not too long ago, and the wicket seemed to have provided Cook’s men just the right impetus going forward. Tim Bresnan (two for 41) then got rid of Ross Taylor (3) with a vicious off-cutter, before Ravi Bopara’s (two for 26) brace made it 62 for five with the wickets of Brendon McCullum (8) and James Franklin (6).

Kane Williamson (67), who came in at No 3, provided some resistance along with the debutant Corey Anderson (30) as the duo tried their best to wade the wobbly Kiwi ship through troubled waters. Getting 104 from 60 balls was always going to be a difficult ask, but the unlikely pairing did extremely well to get it down to 55 off the last four.

Bresnan, bowling the 21st over, was then targeted and ended up going for 19 runs via some unorthodox, yet clean, hitting from Williamson. However, the urgency of the situation was to eventually get to the right-hander as he skied Stuart Broad (one for 25) behind mid-off where Anderson took a good catch running towards the rope. As has become the norm nowadays, the batsman hung around to check the no-ball and, as it turned out, replays showed that there was a strong hint of a front-foot one. However, the official manning the television thought that there was enough of Broad’s front foot behind the line to send Williamson packing.

Corey swung around for a few more minutes before holing out to long-on to put the final nail in the coffin at 140 for seven, with 30 more to win off just 10 deliveries which proved to be too much for the tail.

Earlier, England would have gotten more than their eventual 169, had they not lost seven wickets for 28 runs in the last 31 balls. This was before the infuriating weather, that had hampered many a match in this tournament, beared down on Cardiff to frustrate the Sunday crowd.

The pour ate away more than five hours of the scheduled play time before the skies cleared to facilitate a 24-overs-a-side game. Finally, at 15.45 local, there was a cheer as the Kiwis strode out onto the pitch in bright sunshine to take field. England, put in to bat, opened with Cook and the big-hitting Ian Bell.

With the game reduced to almost a Twenty20 format with a few additional overs, the two openers struck a boundary each in the first two overs, before Bell’s enthusiasm and Brendon McCullum’s lightning-quick reflexes at short-cover accounted for the former’s wicket. Brother Nathan made it two in two for the McCullums in the very next over as Jonathan Trott flicked Kyle Mills straight to mid-wicket.

The Black Caps would have been delighted with their start as Joe Root came out to join his skipper in the middle earlier than he would have expected. However, from there, the mature heads of the experienced Cook and the inexperienced, but prudent, Root guided England at a run-a-ball to the 10th over, before the ante was upped.

England’s score got a boost from 64 for two to 99 for two within the space of three overs as the pair went for their shots. They were helped by some generosity from Nathan McCullum, who dropped three catches, including a lolly at gully-point.

Mitchell McClenaghan eventually got his second wicket in the 15th over of the innings after Root top-edged a length delivery high up in the air towards square-leg where Luke Ronchi took the catch. England slowed down a tad, picking just 20 from the next three overs, before Cook decided to target Williamson, hitting the offie for a six and a four in an over. Finally, it was Nathan McCullum who got to redeem for his errors in the 19th over when Cook drilled the ball straight back to him off his own bowling. The England captain was gone for a well-made 64 off 47 balls.

A collapse followed as England fell from 141 for three to 169 all-out, with Nathan McCullum making it dropped-three-caught-four and McClenaghan getting his third victim to become the leading wicket-taker in the tournament with 11. Mills got two wickets in the final over of the innings to make it four for the match as the Black Caps managed to restrict England to well below 200, which seemed on the cards until Cook and Root were at the crease.