Marlon Samuels is keen to continue playing an anchor role for the West Indies in the ICC Champions Trophy with responsible batting at number four position. 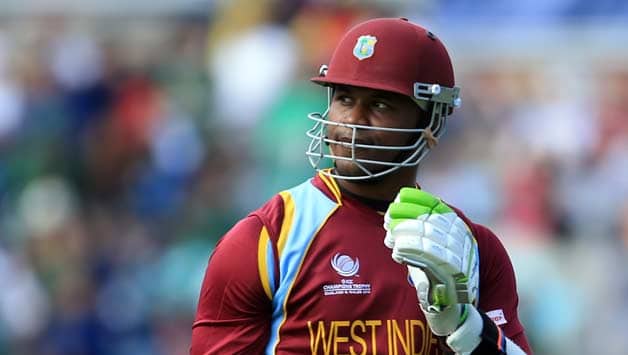 Marlon Samuels is keen to continue playing an anchor role for the West Indies in the ICC Champions Trophy with responsible batting at number four position.

The Jamaican, who scored 30 runs in a low-scoring match against Pakistan at The Oval on Friday, hopes to make his No.4 point count against India on Tuesday.

Two of his four ODI centuries came in 2012 and Samuels wants to play a more responsible role batting at No. 4 for the West Indies.

“I’m batting (number) four so I’ve been carrying a lot of load for the team. I’ll definitely continue to play that role and take a lot of responsibility,” he said

“I have to bat through the innings. Whether I have to speed it up or slow it down depends on the situation. There are still a lot of shots that I can play at the end. A lot if it is a thinking process,” Samuels told reporters at The Oval on Sunday morning.

West Indies spent a solid three hours in training at The Oval while the Indians chose to remain confined to their hotel for the third straight day. Unlike the Indian team management, the friendly Caribbeans let Samuels interact with the media.

Samuels said he has grown in confidence as an international player and his runs have proved that. The batting all-rounder, who bowls off-spins, has scored 3485 runs in 143 ODIs at an average of 30.84 and remains West Indies best bet to hold an innings together in English conditions.

Samuels says he has prepared hard to bat against a moving ball.

“I bat a lot of tape-ball; the rubber ball with tape on one side. It swings a lot. I trained a lot especially before I came to England and it works well for me. So the English condition doesn’t really bother me. I really enjoy batting in England, its a challenging place and the ball does move around a lot but I enjoy it. Its something you have to work on before you come here,” he said.