ICC Champions Trophy 2017 Final: Aamer Sohail has extended his warm wishes to Sarfraz Ahmed and also called on him to keep his controversial statement aside.

Karachi: Ahead of the high-octane Champion Trophy final against India at the Kennington Oval, former Pakistan cricketer Aamer Sohail has extended his warm wishes to Sarfraz Ahmed and also called on him to keep his controversial statement aside wherein he indirectly accused his national side of fixing matches in the ongoing eight-team marquee event. Sohail, in a self-shot video, said that Pakistan are playing the final of the major tournament after a long time and, therefore, they should try to play at the best of their abilities. “This is my special message for Sarfaraz. Sarfaraz, Pakistan is playing the final of big tournament after a long time. Pakistan played very well and you led very well. Please set aside the controversy and give your 100 percent. Try your best for Pakistan,” the Dawn quoted Sohail as saying. FULL CRICKET SCORECARD: India vs Pakistan, ICC Champions Trophy 2017 Final at The Oval

“We will clear the misunderstanding, when you come back. All the very best, do your best, make us proud,” said Sohail while wishing good luck to Sarfraz. While speaking on a Pakistani news channel, Sohail had created a storm by saying that the current ODI skipper and his boys have no reason to rejoice as they have made it to the finals, not on the basis of their performance, but through “external factors”.

“Sarfraz needs to be told that you have not done anything special. Someone has helped you to win these matches. There is no reason for you [Sarfraz] to rejoice. We all know what happens behind the scenes. I can’t tell you who have won them the games. If asked, I will say that the prayers of the fans and God have won them the games. They have been brought to the final due to external factors and not on the basis of their performances,” Sohail had said. FULL CRICKET UPDATES: India vs Pakistan, ICC Champions Trophy 2017 Final at The Oval

Sohail further warned the players to concentrate on their game and remain level-headed; otherwise they would not be able to survive. Following his comments, Sohail received a backlash and had to ‘clarify’ his position on the same. Insisting that his statement was misunderstood, the former cricketer had said that his comments came following Sarfraz’s refusal to dedicate his performance against Sri Lanka to Javed Miandad, saying that their former coach criticses the team a lot.

Contrary to everyone’s expectations, Pakistan stunned favourites England by registering a resounding eight-wicket win to enter the finals of the ongoing Champions Trophy here at the Sophia Gardens, Cardiff on Wednesday. Following the win, Sarfraz said that although no one had expected them to qualify for the finals, they are happy to defy all odds and bounce back from their opening-match defeat to India. 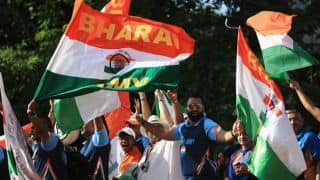