ICC Champions Trophy 2017: India were thumped by Pakistan in the summit clash at The Oval, London.

The much-anticipated finale of ICC Champions Trophy 2017 came to a tame end as India were thrashed by Pakistan by 180 runs. Pakistan outplayed India in all departments to win their maiden title in the tournament history and gave a fitting reply to their critics who were backing defending champions, India, of bagging another title. In the post-match presentation, losing captain, Virat Kohli, took the defeat in good stride and credited Pakistan for exhibiting more intensity and passion on the field. With this emphatic victory, Pakistan also move to the No. 6 spot in latest ICC ODI rankings.

Kohli stated in the presentation ceremony, “Indeed (disappointing). Congratulations to Pakistan. The way they turned things around, it was amazing. They can upset anyone on their day. I have a smile on my face because I am very proud of the boys. Credit to Pakistan; they outplayed us. They were more intense and more passionate.”

India were below par with the ball with the duo of Ravichandran Ashwin and Ravindra Jadeja remaining wicketless in their spells. Barring Bhuvneshwar Kumar, every bowler was thrashed which resulted in Pakistan posting the second highest score in Champions Trophy. Talking about his bowlers, Kohli said, “With the ball, we could have had more wicket-taking opportunities. Sometimes, the opposition does play very well. Even with the ball, they were very aggressive.”

India replied with a paltry 158 all-out in 30.3 overs. Almost half of the score was made by Hardik Pandya with a gutsy 43-ball 76. He was complimented by Kohli for his knock.

Fakhar Zaman’s maiden century scripted a famous victory for Pakistan. He was reprieved on 3 when a no-ball saved him from walking back to the hut. He edged one to wicketkeeper MS Dhoni, off Jasprit Bumrah, but made most of the opportunity since then. Kohli defended his bowler and quoted, “Small margins can be massive in cricket. We need to move on and learn from our mistakes.”

Lastly, he also backed his decision of opting to bowl. “Not at all (on being asked by Nasser Hussain). The pitch was consistent throughout. Didn’t do anything strange or bad in either innings. We just weren’t good enough on the day. We will take that on the chin and move on”, concluded the 28-year-old. 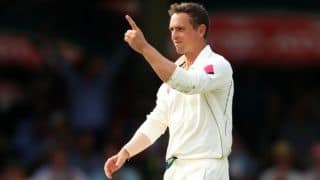