South Africa captain AB de Villiers insists his team is relishing the opportunity to solidify its status as the world s best ODI side with ICC Champions Trophy success.

South Africa captain AB de Villiers insists his team is relishing the opportunity to solidify its status as the world s best ODI side with ICC Champions Trophy success, following its dramatic defeat of England on Monday. Following on from losses to the tournament s host in the first two games of the three-match series, South Africa s bowlers caused an English collapse as Eoin Morgan s men were reduced to 20 for 6 after just five overs, before being bowled out for 153. The seven-wicket win marked a memorable end to the series for both sides for South Africa, a sigh of relief, while England was humbled and reminded of the challenge it faces if it is to succeed on home soil in June. ICC champions Trophy 2017: Points Table

It is South Africa that poses a large proportion of that challenge, alongside reigning champion India. South Africa’s opening partnership of Quinton de Kock and Hashim Amla strikes fear at the top of the order. And while de Villiers admits series defeat to England was not how South Africa would have liked to have started its ICC Champions Trophy campaign, he insists it will do little to knock its focus from the task at hand. I was pretty happy with our preparations for the Champions Trophy, although obviously you don t want to lose a series that you play in, said de Villiers, who will enter the ICC Champions Trophy ranked the world s best batsman.

But I know that we finished on a high, and there were encouraging signs throughout the series and those are the kind of things we like to focus on. We re still ranked the No.1 team in the world going into the tournament, so there are quite a few reasons for us to be confident, but we re still humbled at the same time and know that we have to work hard and take it one step at a time to win this.” De Villiers says South Africa confident ahead of CT 2017 despite England loss

Anything can happen on the day in one-day cricket, that s a fact, and especially with a tournament like the ICC Champions Trophy. When the world s top eight teams are competing for one trophy, it s going to be very competitive. I m sure there will be some close games, and I guess whichever team takes their opportunities the most will come out on top. We know we re still going to have to play well, and imitate what we have been doing over the last 18 months, but we are ready for that. We are very well prepared and ready to move forward.

South Africa starts its ICC Champions Trophy campaign against Sri Lanka at The Oval on Saturday, as it chases its first title since the tournament s inaugural year in 1998, in what was then called the ICC KnockOut Trophy. And de Villiers is under no illusions as to the importance of a winning start to proceedings, emphasising the need for his men to focus on solely the next game on the calendar. ICC CT 2017: Every international game has importance, feels Domingo

It s vital that we get off to a good start. There is not a lot of time in this tournament to bounce back, it s very short with only a few games before the knockout, he said. I think we can expect to see more of what we have been seeing over the last year from South Africa in this tournament a brave brand of cricket. That is what I believe we have been playing, and it has been working for us. We ve got a really good side, and I have full trust in the guys to come out and play really well.”

We re going to take it one step at a time. So many guys have said that before and it s a bit of a clich , but it s important in these kind of tournaments not to look too far ahead. This tournament happens at a rapid pace and there is no room for error, so if you look too far ahead, you might stumble over an obstacle or two. Afghanistan call off cricket ties with Pakistan after Kabul attack 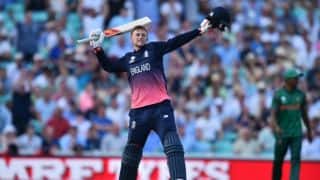