Bangladesh will square off against Afghanistan in the tournament opener in Mirpur.

The International Cricket Council (ICC) on Wednesday confirmed 15 of the 16 men’s squads for next month’s ICC World Twenty20 2014 to be held in Bangladesh.

The cut-off date for the submission of 15-player squads was February 16 and all but Zimbabwe submitted their squads to the ICC before the deadline. Zimbabwe requested an extension, which was accepted by the ICC.

Bangladesh will square off against Afghanistan in the tournament opener in Mirpur on March 16, while former champions India and Pakistan will go head to head in the first match of the Super 10 stage at the same venue on March 21.

The final will be played in Mirpur on April 6, while Chittagong and Sylhet are the other two venues that will be used for the tournament.

Defending champion West Indies has retained 12 players who were members of the side that defeated Sri Lanka by 36 runs in Colombo to win the 2012 event. The three newcomers are Sheldon Cottrell, Andre Fletcher and Krishmar Santokie, who have replaced the experienced but injured trio of Darren Bravo, Fidel Edwards and Kieron Pollard.

India has retained three players who were members of the side that defeated Pakistan by five runs in the inaugural event in Johannesburg in 2007. These players are captain Mahendra Singh Dhoni, Rohit Sharma and Yuvraj Singh. However, six players from the 2012 event will return to Bangladesh as India aims to reclaim the title, namely Dhoni, Virat Kohli, Suresh Raina, Ravichandran Ashwin, Rohit Sharma and Yuvraj.

Pakistan’s side includes seven players from the squad that lifted the trophy at Lord’s in 2009. These players are Ahmed Shahzad, Kamran Akmal, Saeed Ajmal, Shahid Afridi, Shoaib Malik, Sohail Tanvir and Umar Gul.

England has retained Stuart Broad, Ravi Bopara, Tim Bresnan, Michael Lumb, Eoin Morgan, James Tredwell and Luke Wright from the side that defeated Australia by seven wickets in Barbados in 2010.

Host Bangladesh could be the most experienced side going into the tournament as it includes as many as six players who also played in the first event in South Africa almost seven years ago. These players are captain Mushfiqur Rahim, Mahmudullah, Mashrafe Mortaza, Abdur Razzak, Shakib Al Hasan and Tamim Iqbal.

George Bailey will lead Australia’s charge to become only the third country after India and the West Indies to win all the three ICC majors. The squad includes eight players from the 2012 tournament (Bailey, Daniel Christian, Brad Hogg, Glenn Maxwell, Mitchell Starc, David Warner, Shane Watson and Cameron White), while five of them (Brad Haddin, Mitchell Johnson, Warner, Watson and White) featured in the final in Barbados in 2010.

Ireland has retained 13 players from the ICC World Twenty20 Qualifier 2013, which it won after defeating Afghanistan by 68 runs at the Zayed Cricket Stadium in Abu Dhabi. The only two changes are Andrew Poynter and Craig Young replacing John Mooney and the retired Trent Johnston. 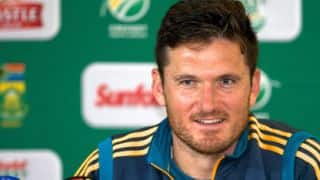