Nathan Coulter-Nile top scored with 92, after which Mitchell Starc picked up 5/46 to give Australia a win by 15 runs.

NOTTINGHAM: West Indies played some admirable cricket, to an extent that they seemed to be on course of registering their 800th ODI win. And what a moment it would have been to do it against five-time World Cup winners Australia. They needed 38 off 30. Australia required four wickets. Aaron Finch threw the ball to Mitchell Starc, and in one of the most sensational spells of fast bowling witnessed, the left-armer got the job done for Australia.

Starc bowled an exemplary 46th over, getting the set Jason Holder and an about-to-explode Carlos Brathwaite. Two overs later, he cleaned up Sheldon Cottrell to finish with his sixth five-wicket-haul. And even though Ashley Nurse entertained by striking four boundaries in the final over, Australia closed out the game by 15 runs.

West Indies started off with a bang, then fizzled, showed promise again before eventually going out with a whimper. They had the match in their grasp but were let down by some poor decisions. They had Australia floundering at 38 for 4 before allowing Nathan Coulter-Nile to play the innings of his life as he and Steve Smith lifted Australia to 288. In reply, West Indies game themselves a solid chance with Shai Hope of Jason Holder’s half-centuries offering glimmer, which was eventually extinguished by some clinical fast bowling by Starc and Pat Cummins.

West were on the charge again and it required a special innings from Smith, along with a career-best performance with the bat from Coulter-Nile to help Australia overcome a tough, initial burst. The former Australia captain registered his maiden half-century since his return to the national side and accompanied Coulter-Nile in an inspiring partnership of 102.

Memories of old of the Caribbean returned at Trent Bridge with the intimidating, fire-breathing West Indies pacers and their hostile bowling flooring Australia’s top order. But the start was squandered, with Smith finding suitable partners in first Alex Carrey and later Coulter-Nile.

Overcoming the disappointment of an erratic first over in which he conceded five wides and bowled a no-ball, Oshane Thomas squared up Aaron Finch, while his new-ball partner Cottrell tempted David Warner to play a false drive, which the batsman ended up slicing to point.

Usman Khawaja looked the most awkward of the lot. Having punched the third ball down the ground to open his account with a boundary, Thomas pinned Khawaja on the helmet. He received another snorter shortly after, this time from Andre Russell, and the next ball, Australia’s No. 3 played away from the body for Hope to take a fine catch diving to his right.

Smith walked out to a smattering of boos but looked the most organised. But while he batted with caution, the destruction continued at the other end. Cottrell brought out his gif-worthy celebration for the second time when he sent back Glenn Maxwell for a duck, pulling awkwardly at a rising delivery for Hope’s third catch.

Marcus Stoinis struck a couple of imperious straight drives off Holder. The promising little 41-run partnership was beginning to flourish before Stoinis pulled Holder to Pooran at short midwicket. Carrey struck five boundaries within nine deliveries, and from 3 off 25, raced to 31 off 42. Russell snapped the stand, with Carrey edging to Hope to affect his fourth dismissal. But Smith ensured Australia kept ticking. Surviving a drop at deep fine leg, he took 77 balls to get to a half-century.

Coulter-Nile had a dodgy start but gained control to crack three sweetly-timed boundaries and a disdainful six off Russell over deep square leg. Plonking Brathwaite over long on, Coulter-Nile brought up his maiden half-century. West Indies lifted themselves in the field through Cottrell, who plucked out a one-handed stunner running in from fine-leg to remove Smith. Cummins was the next to go but Coulter-Nile kept Australia going before falling tantalizingly close to a century.

Cummins, who started off with a wicket-maiden, getting Evin Lewis caught behind, was clouted for three boundaries by Chris Gayle in his next. But the left-hander looked clueless against the menacing Starc. After successfully reviewing two decision against him, Gayle’s luck ran out when the ball struck his bat pad and he had to finally depart. Here’s the twist though. The ball before, Starc had clearly overstepped, but umpire Chris Gaffney failed to spot it.

Nicholas Pooran got off to a fluent start and with Hope, raised West Indies’ fifty off 72 balls. Their own alliance reached 50 off 70 balls, post which Pooran went after Stoinis, making the ball disappear over fine leg. Adam Zampa ended Australia’s search for a wicket when Pooran edged a slider from him for Finch to take a sharp catch at cover. Shimron Hetmyer looked in supreme nick, pulling Starc and Coulter-Nile for boundaries in front of square and greeting Zampa with a heave towards square leg bringing up the 50-run partnership.

An unfortunate run-out curtailed Hetmyer’s stay but Hope consolidated and brought up his half-century. Holder reviewed two lbw decisions, off Maxwell and Zampa, culminating in overall five successful calls for the innings. The first instance, the ball pitched outside leg stump by a fraction and on the second, it missed leg.

Cummins struck a telling blow to remove Hope with a cross-seamer. Out walked Russell with 84 required off 76. With a six and four off Zampa, and a bullet drive down the ground off Starc, Russell started emphatically. But the euphoria was short-lived as the next ball was top edged and taken by Maxwell charging back from backward point.

Holder notched up his fifty at a run-a-ball and with Brathwaite at the other end, kept West Indies alive. A six was swatted off the next ball, and at 46 off 36, West Indies looked favourites. In order to give Australia a chance, Finch went to Starc, a move that hit the bull’s eye. In four balls, Starc snuffed out Brathwaite and Holder to puncture West Indies’ hopes. 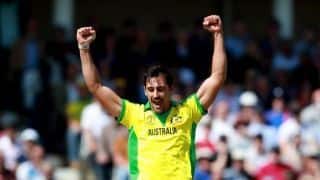