Clive Lloyd says the West Indies should learn the art of adaptability from New Zealand captain Kane Williamson as they fight to avoid World Cup elimination.

There is still a mathematical chance that the West Indies can make the semi-finals.

And even though it is looking increasingly unlikely, it is absolutely vital that they try and finish the tournament on a high note.

New Zealand are one of the teams I said would surprise most people before the tournament started and I have been proven right.

The West Indies need to raise their game if they are to have a chance against New Zealand at Old Trafford on Saturday.

In Kane Williamson, the Black Caps have a terrific captain and an even more impressive batsman.

His innings to knock off South Africa was absolutely masterful, one of the finest I have ever seen in an ODI game. He is a fantastic reader of the game and knows how to adapt to what is going on around him.

The West Indies would benefit from learning a thing or two from Williamson.

I was disappointed with the West Indies performance against Bangladesh. It would appear that they only have one way to play with no variation to their game plan.

They are trying to blast people out and I don t think they understand the English conditions. You cannot always do that here because the pitches during this competition has been batsman friendly despite the rain. It might be green but it doesn t always fly around.

Bangladesh were ready for that sort of onslaught and to chase down 320 with eight overs to spare is a great effort, but it is poor cricket by the West Indies.

They have themselves to blame if they miss the semi-finals, they should have beaten Australia and they definitely should have seen off Bangladesh as well. But the Bangladesh side did their homework and deserved their victory.

There have been some positives for the West Indies though. Shai Hope has been playing extremely well for quite a while since he has arrived on the international scene.

And it was good to see Evin Lewis get a score at last. I think he is a terrific cricketer.

If you have been getting out for small scores, and then get to 70, it is imperative that you cash in. Evin should have got to 130 in the same way that guys like David Warner and Aaron Finch have been doing.

That is the problem with the West Indies batsmen, they are getting good starts and then not capitalising by making big scores. They need to put a higher price on their wicket.

Two of them should have made hundreds at Taunton to bat Bangladesh out of the game like the top sides do.

And with the ball, the bowlers need to stick to a line and length instead of being wayward in both, which leads to leaking runs profusely.

If they do that against New Zealand they will be punished, and yet I still believe the West Indies can perform very well against them if they stick to the right script.

As it currently stands, it is hard to pick an overall winner as we move past the halfway stage of this fascinating tournament.

Any of the top four could be holding the trophy aloft come July 14, I can t wait to see how it unfolds. 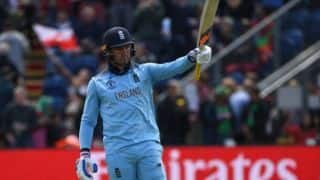 I'm still trying to be fit for Australia: Jason Roy