With the victory, New Zealand have made it three wins from three games in the ICC World Cup 2019.

TAUNTON: New Zealand overcame a period of play where the Afghanistan openers swung, hoicked and gave it the old fashioned whip, before two of their pacers, Jimmy Neesham and Matt Henry arrived at the party. Neesham claiming his maiden ODI five-wicket-haul in ODIs and Henry combined to scalp nine Afghan wickets to bowl them out for 172, a score which New Zealand hardly broke a sweat to achieve, with their skipper Kane Williamson leading the way.

New Zealand lost two wickets inside 10 overs, but turned to their most-reliable pair of Williamson and Ross Taylor to get them home. For a second time running, the two batsmen played out a testing period of play from, Afghanistan spinners before Williamson applied the finishing touches with seven wickets remaining. With the victory, New Zealand have made it three wins from three games in the ICC World Cup 2019.

From 51 for 1, Afghanistan lost steam, with their next nine wickets contributing for a little over 120 runs. Once the opening wicket fell, Neesham and New Zealand found their mark. It was good, aggressive fast bowling, and one that knocked the stuffing out of Afghanistan, who despite Hashmatullah Shahidi s stubborn fifty, could not make the most of a bright start.

Zazai twice skied the ball towards long leg and long on but survived on both occasions, with men converging. Zazai s chancy knock ended shortly after the fifty was raised and he perished slicing Jimmy Neesham to Colin Munro at sweeper cover. Two balls later, Noor Ali Zadran tickled a Matt Henry ball down leg to Tom Latham.

With New Zealand pacers again inflicting early damage, Hashmatullah Shahidi and Mohammad Nabi scored 35 off 9.2 overs, even if that meant spending some time at the wicket. After taking 20 balls to open his account, Shahidi struck consecutive boundaries after a brief rain intervention. Just two overs could be bowled before the heavens opened up again. When play resumed after a second pause, Neesham came back and snuck out Nabi and Najibullah Zadran at 109 for 6. That was his fifth wicket, and with it, Neesham joined Richard Hadlee, Shane Bond, Tim Southee and Trent Boult among New Zealand bowlers to take five-wicket hauls in a World Cup.

By the time Neesham bowled out, Afghanistan simply could not rotate strike. Islam Alikhil, the replacement of Mohammad Shahzad, scored 2 off 21, but managed to hang around for 21 runs with Shahidi. It was Colin de Grandhomme, who ended Alikhil s misery, before Henry knocked over Rashid Khan, who got himself in a tangle. The ball hit his helmet grill and rebounded onto the stumps.

Afghanistan s start with the ball was nothing like their opponents. Alam struck first ball of the innings when Martin Guptill lobbed a bat-pad catch to point. Colin Munro helped himself to a confident start, but having done the hard work flashed a catch to deep-third man. At 41 for 2, Afghanistan were breathing.

Roughly 72 hours after Williamson and Taylor had rescued New Zealand against Bangladesh with a 105-run stand, it was time for them to dig in again, a cause to which they responded well. Afghanistan were without Nabi, and with Rashid taking no part in the second innings as a precautionary measure after getting hit earlier, Afghanistan turned to the tempting guile Mohammad Nabi and the part-time leg spin of Rahmat Shah.

After initial stutters which saw Williamson and Taylor survive a few close edges, and some dodgy running again. But with both playing with patience and plenty of overs left to get the team over the line, Williamson and Taylor ensured smooth sailing for New Zealand. Williamson displayed some purring cover drives, while his partner brought out the trademark Ross Taylor hoick over cow corner. The partnership flourished to 89 off 108 deliveries, with Williamson raising his fifty.

Without much support Afghanistan were sloppy in the field, missing run out chances and conceding boundaries in the deep but Alam managed to lift the side with an untimely wicket of Taylor, bowled by a full toss, having creamed six delightful boundaries. With the equation down to less than 30, Williamson moved to third gear and clubbed three boundaries two boundaries off his counterpart Gulbadin Naib before sealing the game. 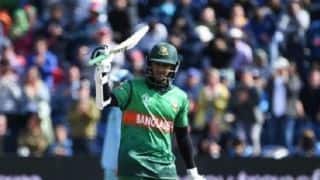 Cricket World Cup 2019: Mortaza expects team to step up like Shakib as Roy redeems himself to power England to win 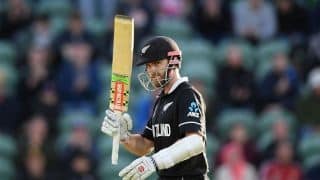