The ranking system moves away from the combined rankings in place earlier and there is now a separate ICC women s ODI team rankings table with ten teams, in line with the men s rankings, which are separate for each format.

The highest-ranked Indian women s player in the list is Harmanpreet Kaur at No.6 (600) followed by Mithali Raj (580).

In women s bowlers rankings in T20Is, Australia s Megan Schutt is at the top with 684 points followed by India s Poonam Yadav with 656 points.

Australia, will however, have to win their upcoming three-match T20I series from 25 to 29 October against Pakistan in Malaysia by a 3-0 margin to retain their top ranking. Pakistan will be unable to overtake sixth-ranked South Africa even if they were to pull off a shock 3-0 win.

The West Indies, who will defend their ICC Women s World T20 title at home from 9-24 November, are ranked fourth with 259 points and India are a further 10 points behind in fifth place. The next five teams on the table South Africa, Pakistan, Sri Lanka, Bangladesh and Ireland complete the lineup for the West Indies event.

The list includes nine sides from Europe, 14 from Asia, 13 from Africa, four each from East Asia Pacific and the Americas, apart from Australia and the West Indies.

Scotland are the top ranked Associate Member in 11th and Thailand take 12th place in the first table following some good performances of late including a win over Sri Lanka in the Asia Cup earlier this year. 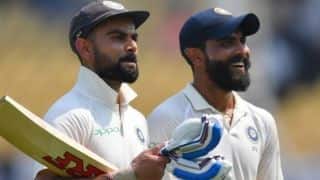