The RCA representative to the BCCI said this move will imply ICC digging its grave.

Rajasthan Cricket Association‘s (RCA) representative in the Board of Control for Cricket in India (BCCI), Mehmood Abdi on Thursday criticised N Srinivasan‘s appointment as the first Chairman of the International Cricket Council (ICC), saying that the the cricket’s world body is “losing its credibility” by making such decisions.

“The International Cricket Council is slowly but surely losing its credibility and with N Srinivasan appointed the first chairman of ICC after its 52-member council approved a controversial revamp to its administrative structure, it seems ICC is doomed,” said Abdi in a statement. A full member council on Thursday approved the amendments to the ICC’s Memorandum and Articles of Association at the Annual Conference and revamped the body’s administrative structure.

Abdi said that the BCCI President-in-exile Srinivasan was only interested in power and not in the betterment of the game. “N Srinivasan, who with his unethical tactics under the mask of having the betterment of the game at heart, is just keen on power and nothing else. He will go to any length to get his way and that may spell the end of ICC,” Abdi, who is also a counsel for Srinivasan’s foe and former IPL commissioner Lalit Modi, said.

“Srinivasan is under investigation for corruption and is known for rude behaviour. He ruled the BCCI with an iron hand and will use the same tactics as the chairman of the ICC, too. He is defiant and was instrumental in India refusing to use the DRS, a clear slap in the face of ICC. Many of the cricket hiccups in the sub-continent, it is alleged, is the result of Srinivasan being at the helm of the BCCI,” he added.

Abdi said by appointing Srinivasan, the ICC was digging its own grave. “At a time when sports the world over are cleansing their disciplines of unethical practices and coming down heavily on unsporting deeds, it is shocking to see Srinivasan heading an organisation that once boasted of adhering to principles and improved governance. How can a person, who once defied the ICC’s smooth working, now head the same organisation and expect cooperation from all around. That seems pretty unlikely. Is ICC digging its own grave?” asked Abdi. India vs Leicestershire Live Score: India reach 214 for 2 at tea 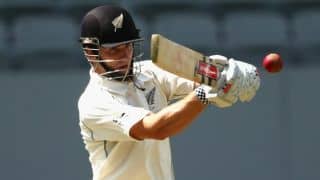