The team consists of 4 players from World Cup winning team England, 3 each from India and South Africa, and one from Australia.

Mithali, who ended the tournament as the second-highest run-getter (409) in the tournament, led her team to the second World Cup final in 12 years. She played some terrific knocks right throughout the tournament. Her 109 against New Zealand in what was a virtual quarter-final paved India s way into the semi-finals. This is the second time that Mithali has been picked in the team of the tournament. Earlier, it was in 2009 when she was included in the side.

The other Indians to make the list were all-rounders Harmanpreet Kaur and Deepti Sharma. From England, Tammy Beaumont (Player of the Tournament), Anya Shrubsole (Player of the Final), wicketkeeper Sarah Taylor and left-arm spinner Alex Hartley were included.

Here is the ICC team of the tournament: 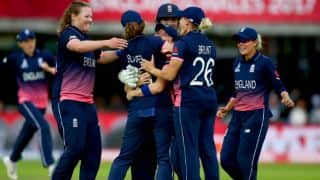