The ICC has turned down an invitation by the Pakistan Cricket Board to attend the briefings planned for the visiting security delegation of the Bangladesh Cricket Board early next month in Islamabad. 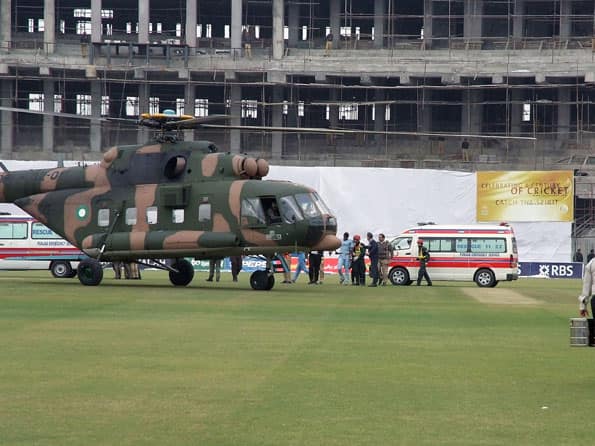 Members of the Sri Lanka cricket team board a rescue helicopter at the Gaddaffi Stadium on March 3, 2009 in Lahore Getty Images

The ICC has turned down an invitation by the Pakistan Cricket Board to attend the briefings planned for the visiting security delegation of the Bangladesh Cricket Board early next month in Islamabad.

Well-placed sources in the PCB told PTI that the board had asked the ICC to send its security experts to attend the briefings regarding arrangements for the planned tour by the Bangladesh team to Pakistan in April.

Pakistan has invited the Bangladesh board to send its team to play two Tests, three one-day internationals and possibly a T20 match in April.

“The ICC informed the PCB that they would only come into the picture once the tour was given final approval by both boards,” one source said.

“The ICC felt that it was necessary for the Bangladesh board to first confirm their team will tour Pakistan in April after which the ICC would review the whole situation,” the source added.

The BCB’s security delegation, including board and government officials, is due to visit Pakistan on March 1 and 2nd to attend the briefings by the interior ministry and senior police officials on the security arrangements and plan that will be prepared for the Bangladesh team’s tour.

No Test playing nation has visited Pakistan since March, 2009 when militants attacked the Sri Lankan team bus in Lahore.

Six Pakistani policemen and a van driver were killed in the attack near the Gulberg roundabout, which is close to the Gaddafi stadium, while five visiting players were wounded.

Pakistan is hoping that if Bangladesh tours in April it would break the ice and give them space to invite other teams.

The source said that the ICC had said it would review the entire security plan for the proposed series once both boards finalised the series.

“The ICC has its own security protocol for series but it has made it clear that since it is a bilateral series it is important for both boards to first finalise the series,” he added.

The Bangladesh board has said that whether it sends its team to Pakistan would depend on whether its security delegation is satisfied with the briefing.

“Once the series is finalised the ICC will enter the scene and also carry out its own assessment of the security situation in Pakistan and see whether the host country is implementing its security protocols.”

The chairman of the board, Zaka Ashraf has already left for Dubai where he is expected to meet with ICC officials to brief them on the security arrangements.

Another source said venues for the matches would only be decided in consultation with the Bangladesh board, but the plan is to hold the matches at major centres like Karachi, Lahore, Faisalabad and Multan. (PTI)

Dav Whatmore to take charge of Pakistan team next month