England will play West Indies on Thursday in their T20 World Cup 2012 Super Eight encounter and fast bowler Steven Finn made it clear they will be sticking to their guns. 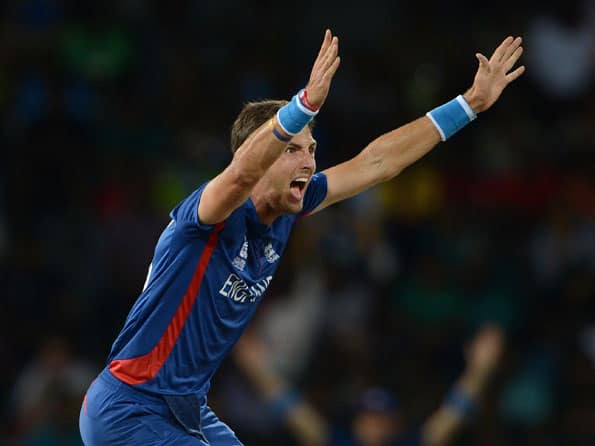 England will play West Indies on Thursday in their T20 World Cup 2012 Super Eight clash and fast bowler Steven Finn made it clear they will be sticking to their guns.

“We don’t have to do anything different than we’ve done,” he said.

“We’ve had one one bad game – we know that – but we move on from it. We brush it under the carpet; we learn from our mistakes, and we get better from it.”

West Indies were last night confirmed as England’s first Super Eight opponents, after a rainy no-result in Colombo which spelled the end of Ireland’s unlucky tour.

The Windies have yet to win a match, having come off worst against Australia in their Group B opener but recorded a superior run rate to Ireland’s.

Their captain Darren Sammy spent much of last summer losing to England in all formats, but he is optimistic of gaining telling revenge.

“We have a strong belief in ourselves,” he said. “The first hurdle is overcome – then the real business starts.

“We’ve got England in our first game and we’re looking to start off very well.

“We’ve played them a few times in the last few months and we believe we can go out and beat them – we have a good Twenty20 record against them.

“England are defending champions, and we will not underestimate anybody.

“They won a tournament in the Caribbean when the wickets were also assisting spinners. So we have to go out there and bowl properly. We hope our spinners can play a big part,” Sammy was quoted saying by ECB official website