Opener Imran Nazir produced the tournament's fastest half-century as Pakistan stormed into the Super Eights of the ICC World Twenty20 with a crushing eight-wicket victory over Bangladesh on Tuesday. 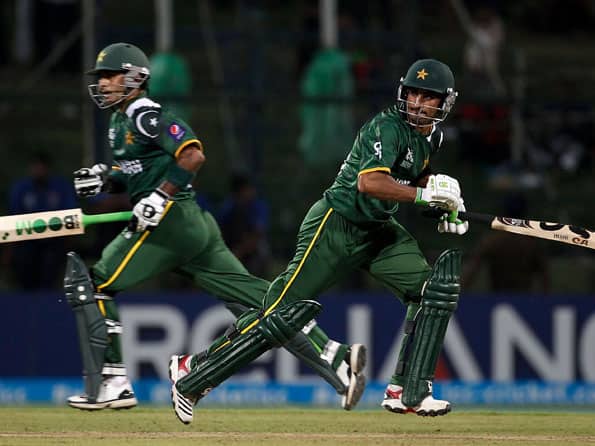 Opener Imran Nazir produced the tournament’s fastest half-century as Pakistan stormed into the Super Eights of the ICC World Twenty20 with a crushing eight-wicket victory over Bangladesh on Tuesday.

Needing a win to advance to the next round, Pakistan rode on Nazir’s 36-ball 72-run blistering knock and his record 124-run opening stand with skipper Mohammad Hafeez to chase the challenging 176-run target with eight balls to spare, in their final group league encounter.

Nazir reached his fifty in just 25 deliveries, one quicker than Chris Gayle’s 26-ball effort against Australia.

In the crucial encounter, Bangladesh needed to win by a margin of at least 36 runs, but their bowlers came a cropper in the face of Nazir’s sustained onslaught.

During his belligerent knock, Nazir struck three sixes and nine fours that left the Bangladeshis shell-shocked, as they had given themselves a chance by posting a competitive total.

Nazir was ably supported by Hafeez (45 off 47 balls) as they produced the tournament’s highest partnership for any wicket.

Electing to bat, Bangladesh rode on Shakib’s heroics and some fine contributions from opener Tamim Iqbal (24) and skipper Mushfiqur Rahim (25) to post their highest score against Pakistan in T20 internationals.

But their joy was short-lived as Pakistan’s chase got off to a flying start with Nazir and Hafeez clobbering the Bangladesh bowlers all around the park.

Nazir cashed in on a dropped chance in the second over and treated the opposition bowlers with disdain to take his side to 64 without loss at the end of the mandatory powerplay.

Nazir, who was dropped by Abul Hassan at mid-on off medium-pacer Shafiul Islam, made Bangladesh pay a heavy price as he picked Islam and Mashrafe Mortaza for a six each to keep the asking run-rate well under control.

Earlier, riding on a whirlwind half-century by Shakib-Al-Hasan, Bangladesh put on 175 for six against Pakistan in their allotted 20 overs.

Electing to bat, Bangladesh rode on Shakib’s 54-ball 84 and some fine contributions from opener Tamim Iqbal (24) and skipper Mushfiqur Rahim (25) to post their highest score against Pakistan in T20 internationals.

In the crucial match against Pakistan which Bangladesh need to win by a margin of 36 runs or more, openers Tamim and Mohammad Ashraful (14) provided a steady start with a 34-run stand before Shakib came up with the entertaining knock, which was laced with two sixes and 11 fours.

Pakistan paid a heavy price for some sloppy fielding as well as they dropped as many as three catches.

Leaft-arm pacer Sohail Tanvir provided the first breakthrough to Pakistan when he bowled Ashraful in the fourth over.

Tamim, who looked in good touch having dispatched Umar Gul for three successive fours in the third over, should consider himself unlucky as he fell victim to a terrible mix-up with Shakib.

After Tamim’s dismissal, Shakib took the onus on himself to guide Bangladesh’s innings and in the process completed his 1000 runs in T20 cricket with a four off Tanvir.

Shakib, in the company of skipper Rahim, mixed caution with aggression and kept the scoreboard ticking with occassional boundaries.

Bangladesh raced to 90 for two in 10 overs, aided by some sloppy fielding from Pakistan.

Pakistan, who did not lose to Bangladesh in an international for 13 years since the 1999 World Cup, brought in dangerous off-spinner Saeed Ajmal into the attack in the 11th over, but the move yielded little result as Shakib picked him up for two consecutive fours.

Shakib looked in ominous form as he resorted to playing cuts and pulls to keep the run-rate at 9 and above.

The 25-year-old batsman completed his half-century in the 13th over with a six off medium-pacer Yasir Arafat over deep mid-wicket boundary.

In the same over, Shakib was dropped at mid-off by Shahid Afridi who could not hold on to the ball while diving to his left. Tanvir dropped a regulation catch of Rahim at midwicket to add to Pakistan’s woes.

Arafat got rid of Rahim in the 15th over when the skipper was caught at deep midwicket by Imran Nazir.

Afridi got rid of Mahmudullah (0) in the next over as Bangladesh reached 136 for four in the 16th over.

Shakib continued with his onslaught as he clobbered Umar Gul for three fours in the 18th over to take his team past 150-run mark.

He was dismissed in the last over by Arafat caught by Umar Akmal at long-off.

Arafat was the most successful bowler for Pakistan with three for 25 while Tanvir and Afridi accounted for a wicket apiece.

Man of the Match: Imran Nazir

ACC cannot help in revival of international cricket in Pakistan