Skipper Eoin Morgan said his new-look England team were under orders to be "brash and aggressive" in the World T20 and that a side once notorious for its conservative cricket had developed an attacking mindset.

Mumbai: Skipper Eoin Morgan said Wednesday his new-look England team were under orders to be “brash and aggressive” in the World T20 and that a side once notorious for its conservative cricket had developed an attacking mindset. England suffered a humiliating exit from the group stages of last year’s 50-over World Cup when they were beaten by Bangladesh, leading to widespread calls for Morgan to be axed. But stung by the criticism, England had a major rethink about their whole approach to short-form cricket and were unrecognisable by the time they played New Zealand and Australia at home later in the year. ALSO READ: India vs Pakistan, ICC World T20 2016: Final decision over venue to be taken by evening, says Rajeev Shukla

As his team dramatically upped their once pedestrian scoring rate, Morgan himself rediscovered the form that had made him one of the most feared players in T20 and one-day cricket. New stars have also emerged such as the powerful all-rounder Ben Stokes and dashing opener Jason Roy. Speaking to reporters after arriving in India for the World T20, Morgan said the team had been transformed over the last 12 months and had shown they were capable of chasing down any total set by the opposition. ALSO READ: India vs Ireland, ICC Women’s World T20 2016 Warm-Up Match: Preview

“I think it’s quite significant the turnaround we have had, the different attitude, the different group of players,” he told a press conference in Mumbai. “I would say it’s the most expressive we have been for a long time… There’s a lot of talent in our side, we encourage our players to go out and be as brash and aggressive as they can and take the game to the oppposition.”

England, who won the World T20 in the West Indies in 2010, are currently fifth in the international rankings after a recent series defeat against South Africa. Morgan identified hosts India as the favourites for this year’s tournament but said there was not much to choose between the other major teams.

“I think the favourites for the tournament are India, I think the fact that they are very good in home conditions, they’ve had a rich run of form lately,” he said.

“I think outside of that it’s a very open tournament,” Morgan concluded. England’s opening match is against the West Indies in Mumbai on March 16 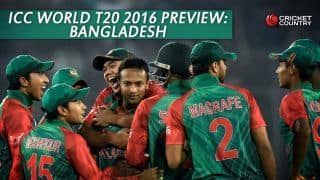