Australia-Bangladesh match was expected to be the feature match of the final day.

Three-time former champion and last tournament’s losing finalist Australia and dark horse Afghanistan progressed from Group B to the next round of the ICC U19 World Cup 2014 on the final day of the first round matches.

Jake Doran scored 99 not out as Australia defeated Bangladesh by 74 runs after the Asian side was set a victory target of 245 runs, but required 231 runs to move to the next round ahead of Australia on a better net run-rate, while Afghanistan scored 130 runs in boundaries as it sprinted to the 192-run target in under 26 overs to beat Namibia by four wickets at Abu Dhabi Oval 2.

Karamat Ali captured five for 36 as Pakistan brushed aside the challenge of Scotland by 146 runs in a one-sided Group A match at ICC Academy 2.

After two days’ rest, the tournament will commence on Saturday when Pakistan take on Sri Lanka in the quarter-final at the Sharjah Cricket Stadium, and India square-off against England at Dubai International Cricket Stadium.

In the Plate Championship matches in Abu Dhabi, Bangladesh will meet Canada and Zimbabwe will face Namibia.

The Australia-Bangladesh match was expected to be the feature match of the final day, but it turned it to be an anti-climax as the Asian side lost its last seven wickets for 42 runs to be dismissed for 170 while chasing 245 for victory.

Left-arm fast bowler Ben Ashkenazi and leg-spinner Thomas Andrews took three for 33 and three for 35, respectively to bowl their side to the top of Group A.

Earlier, Doran hit eight fours in a 124-ball 99 not out to lift Australia to 244 for six after it was in some bother at 61 for four. Doran added 105 runs for the fifth wicket with captain Alex Gregory (48).

Afghanistan was on a mission against Namibia as it scored 130 out of 196 runs in boundaries as it raced to victory in 25.3 overs. Hashmatullah Shaidi slapped six fours and a six in a 43-ball 52 and Mohammad Mujtaba clobbered eight fours and two sixes in a 30-ball 50 after Muslim Musa had taken three for 35 to restrict Namibia to 192 for nine in its 50 overs.

Imam-ul-Haq was on song at ICC Academy 2 when he moved to the top of leading run-getters to date (260 runs) with an attractive 133 that was punctuated with 13 fours and a six from 137 balls. Imam, nephew of former Pakistan captain Inzamam-ul-Haq, added 161 runs for the second wicket with Hasan Raza (57) and 69 runs for the third wicket with Saud Shakeel (40) as Pakistan posted a colossal 308 for seven in 50 overs.

Leg-spinner Karamat Ali then produced the best bowling performance of the tournament to date when he returned figures of 7.5-0-36-5 as Scotland was spun out for 162 with only opener Andrew Umeed with 65 offering some resistance. 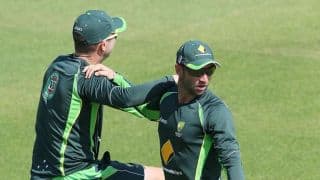