Indian bowlers collective show restricted Australia to 216 in ICC U-19 World Cup 2018 final at Mount Maunganui. It was a late-order collapse by Australia that saw them lose 6 wickets for just 33 runs to fold for 216. It was Jonathan Merlo’s fighting fifty, that kept Australia’s hopes alive. Indian spinners ruled the middle-overs maintaining pressure on the Australian batsmen. Anukul Roy, Shiva Singh, Ishan Porel and Kamlesh Nagarkoti ended with 2 apiece to keep India on course their fourth title. Roy also become the joint highest wicket-taker in tournament along with Afghanistan’s Qais Ahmed and Canada’s Faisal Jamkhandi with 14 wickets in the kitty.

Winning the toss, Australia openers Jack Edwards and Max Bryant were off to a steady start. Bryant, who has had a topsy-turvy tournament was off the mark early. He freed his arms and stacked up boundaries almost every over. Edwards joined along and got a couple himself against Mavi. The duo brought up 32 runs on the scoreboard. India were guilty of misfields and overthrows in the initial overs.

Byrant s cameo came to a halt after Porel got his wicket of a short delivery. Skipper Jason Sangha was lucky to survive after Porel dropped an attempted one-handed catch. Edwards unfazed by losing his partner, continued to whip boundaries off Mavi, who was clocking 138-140 kmph constantly.

Australia s start-stop innings continued as Porel struck for the second time to remove Edwards. He was caught by Nagarkoti at the covers. India had the opportunity to grasp Merlo for a golden duck, but much for Harvik Desai’s dismay. However, India found other means to halt Australia s momentum. After showing brilliance on the field with a catch, Nagarkoti s extra pace produced an edge to Desai. He dived to the right to send Sangha back to the hut for 13.

However, Merlo and Param Uppal then rebuilt Australia s innings. The duo added 75 runs for the fourth wicket keeping Australia on course to 250-plus score. Anukul Roy then punched his way back and added another wicket to his tally disrupting a growing partnership. Uppal returned a simple catch to Roy for 34. Merlo, meanwhile, brought up his fifty; his first of the edition.

Merlo handled pace and spin with ease. McSweeney along with Merlo revived the Australian innings again with their fighting 49-run stand for the sixth wicket. Australia s partnerships could not kick on again as Indian spinners got their act straight. McSweeney returned Singh an easy catch that sent him back to the pavilion for 23. Will Sutherland followed suit and was gone for 5.

Merlo marched on and took Australia beyond 200-run mark, until his reverse-sweep shot went all wrong and was caught by Singh for 76. Baxter Holt and Zak Evans played some risky shots and ran between the wickets to post a competitive total. Between 45-47 overs wickets kept tumbling in succession as Singh and Nagarkoti inflicted collapse to wrap the Australian innings by 47.2 overs. 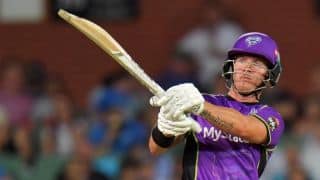 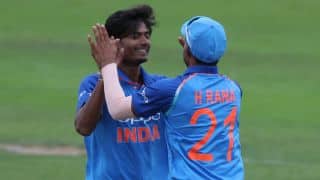