India will begin their U-19 World Cup Journey from January 14 against Australia.

India will begin their U-19 World Cup journey from January 14 against Australia. India recently registered a massive win against South Africa in a warm-up game. India had ended up runners-up in the last World Cup. Coach Rahul Dravid, while talking to ICC, said that adapting the situations quickly will be the key.

I think the quicker you start learning about yourself and how you tick, and the quicker you start taking responsibility for the way you carry yourself as a professional cricketer both on and off the field, the better. If you want to be a successful cricketer you need to figure out yourself, both on and off the field, said Dravid.

India have won the World Cup three times, the latest being in 2012. In 2016 India lost to West Indies in the finals. Talking on that, Dravid said the competition gets competitive towards the fag end of the tournament.

At this level it s generally quite hard-fought, and the skill levels of most teams are pretty much even and equal. You want close games, but you want to win those games, he said

But generally I find with Under 19 World Cups it gets competitive, it gets quite tight especially towards the back end of the tournament. From that point of view, there isn t much disappointment left after losing in the final of the 2016 ICC Under 19 Cricket World Cup. I think just the experience of playing in Bangladesh is from our perspective more important than the actual winning and losing.

India play Australia on Sunday to which Dravid believes playing on different conditions will give the youngsters a good opportunity and learning.

From our perspective while it would be nice to win I think the more matches we play in these conditions, and outside of the subcontinent itself, is a rare opportunity for a lot of these kids. I think what we learn out of this tournament is invaluable whether we win or lose, Dravid said.

Prithvi Shaw, who made news with his rich form in domestic cricket, will lead the team for the World Cup. When asked about Shaw s approach in World Cup, Dravid made it clear that there is no focus on an individual but the team as a whole. He also believes that the Indian squad has better players than other teams in terms of skills.

We don t like to focus too much on the individuals. We believe we ve got a very good squad together and the opportunities for us to play well as a team are there.

I think a lot of these kids at the Under 19 level, by the very nature of the fact that they are here, are probably a lot more talented and just have better skill sets than some of the other kids who they compete with. And then suddenly as they leave this level they compete with people who have better skill sets than them, more experience, and it s just the adjustment of having to deal with that kind of thing is something we find is a big challenge, Dravid added. 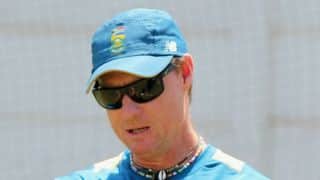