India thrashed Papua New Guinea (PNG) on their way to their consecutive win in the ICC Under19 World Cup 2018.

Tuesday morning at the Bay Oval, Mount Maunganui witnessed an expected result as India thrashed Papua New Guinea on their way to their second consecutive win in the ICC Under-19 World Cup 2018. India, confident after battering Australia in their tournament opener, thoroughly dominated PNG, leaving no room for the opponents to create any impact. Anukul Roy bagged 5 wickets which ended PNG’s innings at 64. Prithvi Shaw then scored his second half-century of the tournament to take his side to the desired victory.

India won the toss and asked PNG to bat. In the absence of the injured Ishan Porel, Shivam Mavi and Kamlesh Nagarkoti opened bowling. PNG openers survived the first 2 overs, but Mavi’s second over got India their first breakthrough, getting rid of Igo Mahuru for 4. Simon Atai tried to hang around, but Mavi continued his work at the other end, getting Heagi Toua clean bowled for an 8-ball duck.

Nagarkoti converted a confusion between the batsmen into a run out off the very next ball. His direct hit claimed the wicket of Atai, who looked better than the rest, for 13.

The rest was taken care of by 19-year-old Jharkhand left-arm spinner Roy, who ran through the middle order. His 5 for 14 ended PNG’s innings for 64. Ovia Sam (15) was the highest run-getter while only three batsmen managed a double-digit score.

The delivery of the match came from Nagarkoti, who bowled Leke Morea for a golden duck with a scorching yorker.

In the following innings, some picturesque shots from Shaw took his side to victory in 8 overs. Shaw scored a 39-ball 57 with 12 fours as his partner Manjot Kalra took a backseat. However, PNG did manage to produce a chance. James Tau managed to allure Shaw to mishit one delivery, which landed in mid-off. However, the fielder came running in and dropped the opportunity.

Roy was adjudged the Man of the Match for his stupendous spell. India are on top of Group B now and have almost booked their quarter-final spot.

Player of the Match: Anukul Roy. 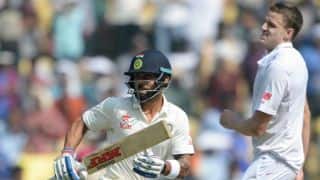 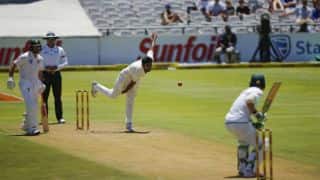