Rahul Dravid added before the game started, we spoke about the dangers of being complacent and we wanted to get a win.

Fatullah: Following India’s dominating 197-run victory over Namibia which helped them enter the semifinals of the Under-19 cricket World Cup, head coach Rahul Dravid heaped praise on his side and termed the win as the best all-round performance so far. Opener Rishabh Pant struck a brilliant 111 off 96 balls, alongside Sarfaraz Khan (76) and Armaan Jaffer (64), which steered the team to a massive score of 349 for six in 50 overs. In reply, Namibia were bundled put for a mere 152 in 39 overs, thanks to spinners Mayank Dagar (3-25), Anmolpreet Singh (3-27) and Washington Sundar (2-27). “I think we have played some good cricket right through the tournament. At some stages, I still feel we have not played a perfect game, but this was our best all-round performance,” Dravid said after India’s win on Saturday. Full Cricket Scorecard,India U19 vs Namibia U19, 2nd Quarter-Final match

“We had a few hiccups earlier on in the batting but it is nice to see that we have recovered and we are playing well. We’re playing good cricket, focusing on the processes and not worrying too much about the results and things are going well,” the former India batsman said. Dravid said he had reminded his boys not to be over-confident or complacent. “When you come into knock-out stage, you can’t take any team for granted. Namibia put in some very good performances to get here. Before the game started, we spoke about the dangers of being complacent and we wanted to get a win,” he said. READ: Rahul Dravid to mentor Delhi Daredevils for IPL 2016

“The focus was to win and not about anything else. I am glad that we were able to put on a commanding performance and qualify for the semi-finals,” Dravid said. Three-time champions India, will take on the winner of Sunday’s quarter-final between strong contenders England and Sri Lanka in the first semi-final in Mirpur on February 9. “We set a good target with Pant leading the way and then fielded and bowled well today,” said India captain Ishan Kishan.

“It was nice to move into the semi-finals with such a good win. Namibia had a good start, but we needed to stay patient and once the first wicket fell, we applied pressure on their batsmen,” he said. Asked whether India would prefer to face England or the West Indies in the semi-final, Kishan said, “We can fare well against either team. We just need to play to our strengths and do the basics right.” 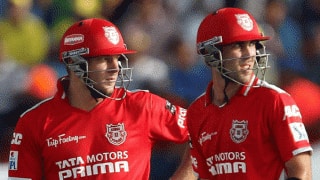