South Africa beat Australia by 80 runs in the ICC U-19 World Cup semi-final.

South Africa qualified for the final of the ICC Under-19 World Cup 2014 with a convincing victory over Australia at the Dubai International Cricket Stadium. Skipper Aiden Markram has said that the South Africans backed their plans despite the recent record of the venue, where teams batting first failed to get off to good starts.

Speaking to the media after the victory, Markram said, “It was not a comforting stat. But we came here knowing that and backed ourselves to execute our plans well.” In the knockouts held at the Dubai Stadium, all teams that have won the toss have chosen to bat first. However, they have often been dented with quick wickets. On Wednesday, South Africa’s openers managed to give them a start of over 100 runs, which set the tone for the victory.

Initially, Australia’s bowlers bowled too many wides and that helped South Africa a lot. “It helped. With it we could be a bit more circumspective with how we played. On this deck, the new ball does go around early on. So, the plan was to have good compact position early on and kick it on at the end,” said Markram.

Markram also praised the performances of his fast bowler Kagiso Rabada. He said, “It was spectacular. When you have someone like him in your armoury, especially when he is as pumped up and as motivated as today. Today’s performance was awesome and the cherry on top for all the work that he has done prior to the tournament. It is good that it paid off, and I am over the moon for him.”

At the same time, Markram complimented his opening partner Clyde Fortuin. The opener scored 74 and then took a magnificent catch with the gloves. “I am over the moon for Clyde as well. He went through a tough patch but he bounced back really well and he played out of his shoes. It’s unfortunate that he could not get to the three figures, but it will motivate him and make him hungry for the finals,” said Markram. 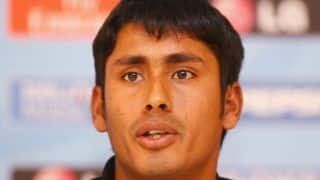