West Indies's stand out players in the tournament,Chanderpaul and Pooran led the way yet again.

Scoring runs against India runs in the Chanderpaul genes, For years Shivnarine Chanderpaul has been a thorn in India’s flesh at the highest level and now it was his son Tagenarine’s turn to do the job. However, it was a typical effort as he stood firm as West Indies failed to overhaul a big Indian score in the fifth place encounter at the ICC Under-19 World Cup 2014 at the Sharjah Cricket Stadium.

One easily gets reminded of the West Indian great while watching his son bat. He doesn’t have the open stance, but marks his guard with the bail and has a shuffle across. Facing a huge target of 341, West Indies were always under the pump, but when Chanderpaul combined with Tristan Coleman, they may have seen a ray of hope. After a circumspect stat, they attacked and added 91. Brandon King came thereafter and did not last too long.

That is when the star of the previous game Nicolas Pooran entered the park. In tandem with Chanderpaul, he gave the Indians a real scare. Smashing the ball to all parts of the ground, he made it look all too easy. Swinging across the line at times or backing his instincts, he looked in total control. As a result, he brought up his half century in no time and that innings featured four sixes and four fours.

Just then, at 204 for three in the 36th over, Pooran was dismissed by Chama Milind. Chanderpaul had already crossed his half century and looked good for a lot more. As Pooran was smashing it around, he did hold one end and only attack at times. A highlight of the Chanderpaul knock was one six he carted over mid-wicket.

Fabian Allen came and gave Chanderpaul some good support and also sent a few into the stands. Indians were still a bit nervy as West Indies were getting those partnerships. Chanderpaul was going strong with a few aggressive men giving him company. But then, Milind had Allen caught behind with the slog overs starting and that was the end of the West Indian fight.

From that point onwards, it was all about Chanderpaul’s feat and he did get there when his side was all but out of contention. Even when he raised his bat, it was quite reminiscent of his father. Perhaps a sign of things to come.

Earlier, the Indian batsmen put in a team effort to put up a huge total of 340. Ankush Bains led the way with 74, Sanju Samson scored 67 and Shreyas Iyer scored 66. Deepak Hooda also contributed with a handy 42 lower down the order. Gudakesh Moti-Kanhai took three wickets for the West Indies. 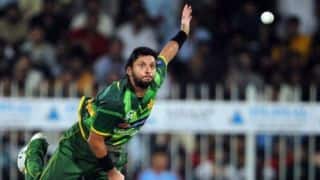 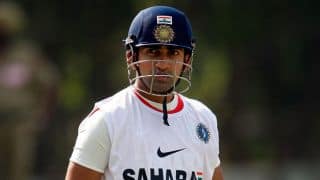