The last match ahead of quarter-final will surely serve India as a practice.

After thrashing Australia and Papua New Guinea (PNG), confident India are set to challenge Zimbabwe at Mount Maunganui in the ICC Under-19 Cricket World Cup 2018. India have emerged as one of the strongest contenders for the trophy as they made both their victories look like cakewalk. Though Australia put some competition, India gave no chance to PNG, bundling them for 64 and then chasing the target without losing any wicket. In the next match, India are the hands down favourites and are expected to dominate.

The last match ahead of quarter-final will surely serve India as a practice. Hitting consecutive half-centuries, captain Prithvi Shaw is leading the side as an example. His opening partner, Manjot Kalra, has also shown signs of being able to play long knocks. Shubman Gill, too, had impressed in the first match against Australia but did not get the opportunity in the next, as neither of Kalra and Shaw were dismissed against PNG.

The toss will be a crucial one on Friday, for both Zimbabwe and India. India can opt to bat, which will give them a chance to test their middle-order which they have not been able to do consistently so far. The entire batting line-up will stand a chance to play and understand the characteristics of the pitch ahead of the knock-out stage. This can also ensure their victory, as 134 has been the best, Zimbabwe batsmen have gathered so far in the tournament.

India’s bowling has passed all the tests already, with the pacers as well as the spinners excelling in overseas conditions. Shivam Mavi and Kamlesh Nagarkoti sealed India’s victory against Australia, displaying a brilliant show of fast bowling while against PNG, spinner Anukul Roy bagged a 5-for. India will also hold the experience of playing at the same venue for quite some time now.

Wesley Madhevere and Liam Roche have been the most consistent bowlers for Zimbabwe and a lot will depend on these two. Though India showed very little discomfort against pacers, they traditionally are better players of spin and if Zimbabwe bowl first, they will have to make full use of whatever the New Zealand conditions have on offer for them.

Zimbabwe’s batting has been their weak-link. Madhevere has been a dependable name in this department as well, being the only Zimbabwe batsman to get a half-century in the tournament. Apart from him, Gregory Dollar in the top order and Robert Chimhinya in the lower-middle order have impressed. 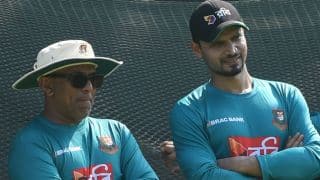