India beat arch-rivals Pakistan by 203 runs in the ICC Under-19 World Cup semi-final to set a date with Australia in the final of the tournament.

India beat arch-rivals Pakistan by 203 runs in the ICC Under-19 World Cup semi-final to set a date with Australia in the final of the tournament. This is India’s sixth entry to the Under-19 World Cup Final, the most by any side. India finished runners-up in the 2016 edition in Bangladesh. Their last win came under Unmukt Chand in Australia in 2012. They chief architects for India’s win were Shubman Gill and Ishan Porel.

Electing to bat, India were off to a positive start; they had raced to 89 in the 16th over when captain Prithvi Shaw fell for 41. Muhammad Musa, who would later go on to star with the ball, fired a throw in at the right time. Five runs later, opener Manjot Kalra departed for 47 after getting an inside edge to the wicketkeeper.

The Indian middle-order stuttered against Arshad Iqbal’s pace; he accounted for the wickets of Harvik Desai, Riyan Parag and Abhishek Sharma, but Gill stood firm at one end. India lost half the side in the 34th over at the score of 166 when Anukul provided the needed support to Gill. The duo added 77 for the sixth wicket. Gill brought up his hundred in the final over to guide India to 272 for 9. This was his fourth hundred. Pakistan’s fielding let the side down. It allowed India the start they got and also the finish. Musa finished with a four-wicket haul.

Ishan Porel took it from thereon. Kamlesh Nagarkoti and Shivam Mavi had grabbed all the headlines till now but in the semi-final, the Bengal pacer dismantled Pakistan’s top-order, reducing them to 37 for 5. Nagarkoti and Mavi kept the Pakistan run-rate in check as Porel ran through the side. Spinners Shiva Singh, Riyan Parag, Anukul Roy and Abhishek Sharma contributed in the six other wickets to fall.

India’s spin troika and the three-man pace battery proved too much for Pakistan, as they were bowled out for 69. This is India’s fourth win against Pakistan in Under-19 World Cup, making the head-to-head level at 4-4.

Man of the Match: Shubman Gill 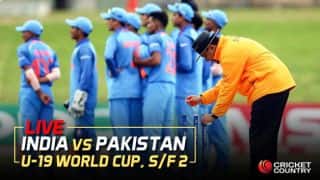 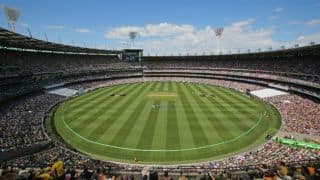