A top ICC official has urged cricket bodies around the world to follow Australia’s lead and dramatically raise wages for women’s players to stop them dropping out of the sport. Clare Connor, the former England captain who now heads the International Cricket Council’s (ICC) women’s committee, told AFP that other countries must match Australia’s eight-fold increase in wages.”We are all going to think very seriously of how well our players are remunerated,” she said in a phone interview.”Because if we don’t look after them they will go and choose other sports or other professions and that will be a tragedy.”

The women’s World Cup this year won by England was hailed as a breakthrough for the women’s game, with full stadiums and high TV ratings around the globe. But many top players have said there has to be follow-up from the cricket hierarchy to acknowledge what is a growth area for the sport. Connor said higher pay was a key area for women’s cricket as it moves mainstream and generates increasing commercial opportunities. Cricket Australia’s new pay deal ensured a windfall for its women players, whose total payments have increased from $7.5 million to $55.2 million.

India’s cricket board, the world’s richest, has also promised a salary increase for women players, but no details have been announced.”Obviously the men get in significant commercial revenues to the game,” Connor said.”We are just starting out on our journey, hence there is a lot of discrepancy or difference how players are paid in various corners of the globe,” she added. Tony Irish, chief executive of the international players’ association, also told The Guardian that the women’s game is at risk from match-fixers, who often prey on players on low pay.

“They (Australia) are certainly setting the bar very high and this is a key issue for lots of countries. It is amazing that international women can earn that sort of money,” Connor said.”(India) have got a team that has captured the imagination and they have obviously got huge number of girls that could be attracted to the game as a result,” she added.

India captain Mithali Raj, who became the top run-scorer in the women’s one-day game at the World Cup, is hoping the Board of Control for Cricket (BCCI) in India will make good on its pledge for higher pay.”Recently there was news that the BCCI is looking into it and we are hoping that it would be positive,” the 34-year-old batswoman said. In what is now a packed women’s calendar, the second edition of the world championships started this week with a one-day series between West Indies and Sri Lanka.

She added that ICC meetings in Auckland this week would “look at the strategy for the women’s game to grow it and to ensure that we have got more competitive teams than just the strong top eight”. Surveys by the ICC have highlighted the growing popularity of the game and increased media coverage. 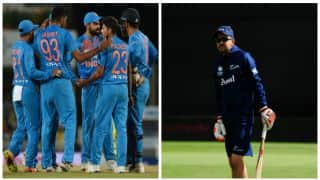 JP Duminy on Test retirement: I felt I needed a different path