Minnows Sri Lanka caused the biggest upset of the ICC Women's World Cup as they defeated defending champions England by one wicket off a last-ball six in a thrilling Group A encounter at the Brabourne Stadium at Mumbai on Friday. 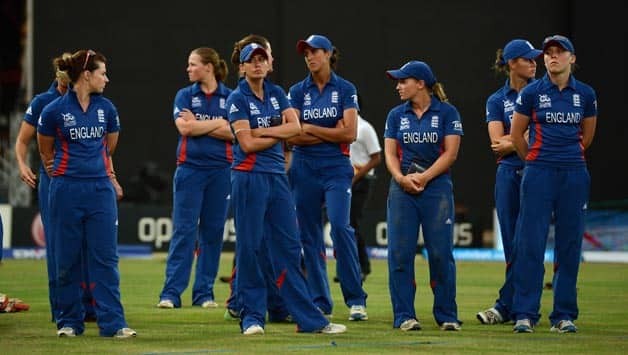 Minnows Sri Lanka caused the biggest upset of the ICC Women’s World Cup as they defeated defending champions England by one wicket off a last-ball six in a thrilling Group A encounter at the Brabourne Stadium at Mumbai on Friday.

After drawing level with England off the penultimate ball, Sri Lanka’s Dulani Manodara pulled Georgia Elwiss over mid-wicket for a superb six to complete their first-ever win over their fancied rivals in any form of the game.

Chasing 239 for a win, the Lankans got off to a flying start with a record century partnership between Chamari Atapattu and Yasoda Mendis, but slumped to 157 for 5 before Kaushalya Lokusooriya brought them on the doorsteps of victory with a whirlwind 56 off 41 balls with three sixes and 5 fours.

Kaushalya was run out off the penultimate ball at the non-striker’s end before Dulani slammed Elwiss for a six to complete a shock win over the three-time champions.

The left-right opening combination of Atapattu (62 in 72 balls) and Yasoda (46 in 98 balls) laid the foundation of the Lankan run chase. But after Atapattu’s exit at 103, the underdogs lost a clutch of wickets in a short span — including that of Yasoda.

They looked like slumping to their eighth defeat in nine contests (one no result) against England in ODIs, before Kaushalya played the match-winning innings to knock the wind out of the champions’ sails.

Kaushalya, lucky to be dropped on nine by Jennifer Gunn in the deep, took full advantage of her ‘life’ to hit her repriever for two fours in the 48th over in which the bowler gave away 16 runs.

Needing 13 from the last 12 balls, Kaushalya lost her eighth-wicket partner Deepika Rasangika, with seven balls remaining and her side needed nine off the last over.

The hard-hitting batter pulled Elwiss for a six to bring down the target, was dropped by the bowler in the next ball and then got run out in a dramatic final over before Dulani hit a six off the last ball to complete a famous win.