Amy Satterthwaite anchored the New Zealand innings with a fluent 85 to guide them to 220 for 8 against England in the third-fourth place playoff match of the ICC Women's cricket World Cup at the Brabourne Stadium in Mumbai on Friday. 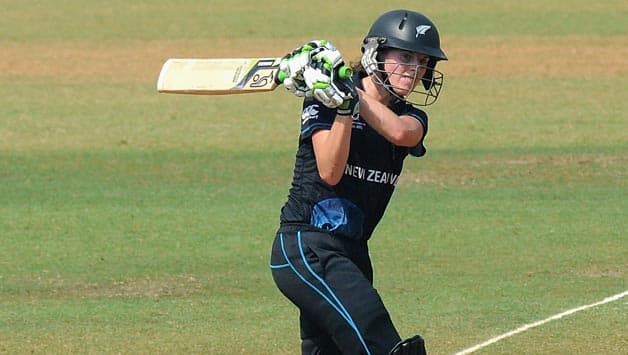 New Zealand women scored 220 for eight against England Women in the third-fourth place playoff match as Kiwi batswoman Amy Satterthwaite scored a fluent 85 in the ICC Women’s World Cup at the Brabourne Stadium in Mumbai on Friday.

Last match centurion Satterthwaite’s 85 came off 95 balls. The one-down batter stitched a 59-run partnership for the fifth wicket with Katie Perkins (20), as the duo tried to steady the innings after the Kiwis were reduced to 99 for four.

Trying to negate the conditions at start of the play, New Zealand, who were put into bat, started cautiously and the opening pair of skipper Suzie Bates and Frances Mackay managed to add only 35 runs in the first 10 overs.

Jennifer Gunn provided England the first breakthrough when a miscued shot from Bates flew into the hands of Lydia Greenway at point. Bates, the leading run-scorer in the tournament, made 21 off 41 balls, including four boundaries.

Mackay, who looked uncomfortable against the spinners, was dismissed when she was castled by Arran Brindle after scoring 30 in 62 balls. She hit four fours during her stay on the crease.

Number four batter Sophie Devine (8) was unlucky as she was run out at the non-striker’s end when Brindle tried to field the shot from Satterthwaite and the ball hit the stumps.

After off-spinner Danielle Hazell had Perkins stumped, wicketkeeper Rachel Priest tried to accelerate with Satterthwaite but perished while trying to play the big shot.

It was a double blow for the White Ferns as they lost the Satterthwaite the next ball, when she was bowled.

A late flurry of boundaries from Nicola Browne saw England leak 15 runs in the last over. Browne plundered the England attack with four boundaries and a six to make a breezy 12-ball 27.

India A vs Australia Preview: Gambhir looks to regain ground in warm-up match