Notwithstanding that they have already qualified for ICC Women's World Cup final, Australia are eager to go all out for a victory against the West Indies in their final Super Six match at the MIG Club ground in Bandra in Mumbai on Tuesday. 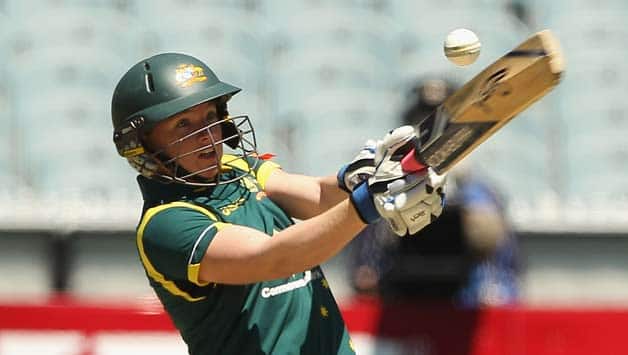 Notwithstanding that they have already qualified for ICC Women’s World Cup final, Australia are eager to go all out for a victory against the West Indies in their final Super Six match at the MIG Club ground in Bandra in Mumbai on Tuesday.

“We will be going out there with the intention to go through the entire tournament undefeated,” said Jess Cameron on the eve of the game.

Australia, with eight points from four successive wins in the second stage of the competition, can afford to relax but Cameron insisted that there is no plan to rest key members.

“I don’t think that’s going to happen. Cricket is a funny game, it can turn around in the next game. We want to make sure we win tomorrow and win well,” said Cameron.

West Indies spinner Anisa Mohammed, meanwhile said, though Australian team is the only side in the world her country has not beaten, she is confident of defeating them tomorrow.

“Australia is the only team we have not defeated in the world but it’s going to change tomorrow. I can guarantee that,” said an upbeat Anisa.

“We are one win away from a final. We have waited for four years. We are set and ready.

“Once we stick to basics and keep supporting each other, everything will fall in place. All teams have lost a game and tomorrow it’s their [Australia] day to lose,” she added.

The Windies have three Super Six wins under their belt and a win over Australia would put them in the final against the same opponents on February 17.

The other two contenders, defending champions England and last edition’s runners-up New Zealand, can pip the West Indies by winning their head-to-head clash, also to be played tomorrow, if the Windies lose and end up with an inferior net run-rate.

Anisa said the team had a good idea about the MIG ground and the nature of the pitches having played at the venue earlier.

“Last time we played Sri Lanka [in the tournament] here, we posted a big total batting first (368). We played against Australia in the warm-up game. We have had a feel of the ground and pitches.”

“If we get those two out cheaply I think we would do well. Their line up is very strong and we have to work hard.

Our batting line up is strong and it’s going to be a tough match,” she said.

Cameron added that the team was focused only on tomorrow’s game and not thinking about the final.

“We will take one game at a time. Tomorrow is definitely an important game for us. You look at the West Indies. They are a really strong side. England and New Zealand are (also) very good competitors. Whoever we come up against [in final], we will have a close game,” said Cameron.