Australia recorded a comfortable seven-wicket victory over New Zealand after opener Meg Lanning smashed her way to a 104-ball 112 in their ICC Women's World Cup match at Cuttack on Tuesday. 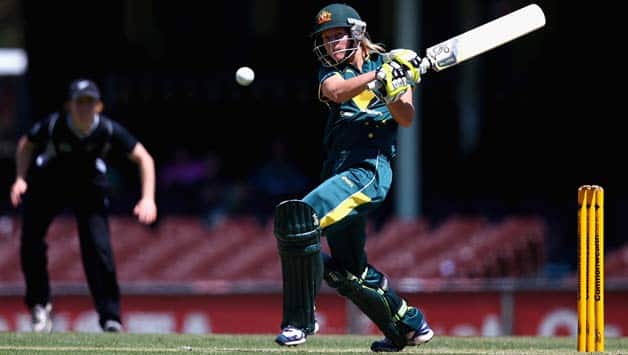 Australia recorded a comfortable seven-wicket victory over New Zealand after opener Meg Lanning smashed her way to a 104-ball 112 in their ICC Women’s World Cup match at Cuttack on Tuesday.

Chasing 228 after opting to bat second, Australia raced to the win with as many as 70 balls to spare, at the DRIEMS Ground, Tangi.

21-year-old Lanning, who blasted 17 fours and a six during her stay at the crease, found an able ally in Jess Cameron, with whom she added 182 runs for the second wicket in just 29 overs. Cameron made 82 while facing 87 balls, and hit 12 fours and a six.

Bates’ 134-ball 102 was the knock around which the Kiwis built their innings after losing four wickets with just 39 runs on the board. The 26-year-old skipper added 103 runs for the fifth wicket with Katie Perkins (41) and was then involved in a 69-run sixth-wicket stand with Nicola Browne (39).

Bates’ knock and her two partnerships gave the Kiwi total a semblance of respectability after the early blows. However, it did not prove enough for the Aussies as they cantered to an easy win.

Australia’s Megan Schutt was the pick of the bowlers from either side as she finished with impressive figures of three for 40 from 10 overs.